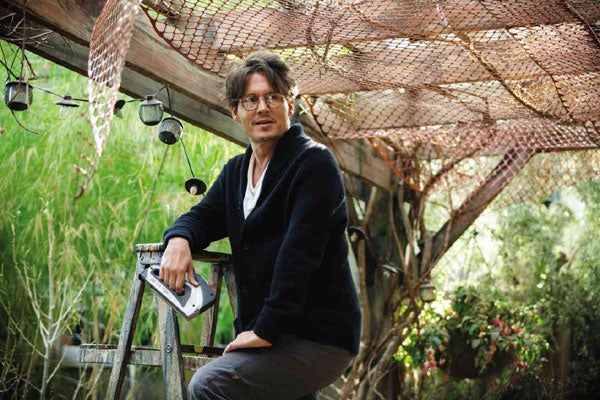 DEPP plays a terminally ill scientist who uploads his mind to a computer in “Transcendence.” Photo by Peter Mountain

LOS ANGELES—The man—our Captain Jack Sparrow, Mad Hatter, Tonto and Edward Scissorhands—is in love. In our years of interviewing Johnny Depp, the dude has always been cool and open, but in our most recent chat, he was even more candid about the new love in his life. He is engaged to be married to Amber Heard, who costarred with him in “The Rum Diary.” Sporting the unique fashion style that only he could pull off, Johnny wore a vintage 1950s jacket, striped shirt, with his favorite accessory, a bandana, this time dangling from the right pocket of his ripped, faded baggy jeans.

Johnny, starring in the drama/mystery/sci-fi “Transcendence,” wore his usual assortment of trinkets. But this time, there was a new, sparkling “trinket” on his left index finger—a ring, but we’re getting ahead of the story.

“Every day, every year that you get a little bit older, you get a little bit wiser,” he began when asked why he changed his mind about marriage. “You have an easier, better look at what’s going on in your life. Then you meet someone. I am everything that she wouldn’t want to be with. In a lot of ways, she’s everything that I wouldn’t want to be with because with actors and actresses, it’s not an easy deal. But she has a very good perspective on her career.”

Looking elated and inspired, Johnny continued, “On one of the first times I sat down with her, just talking after we met, I was astonished at how smart she is. She’s a real strong, brilliant woman who has a lot to say. When you have that combination… And also, she has the ability to bring up the names of old blues guys, like Slim Harpo, Tampa Red or any of these somewhat obscure guys. She has great knowledge of that and country music. It was just… there was no way around it.

“It’s an interesting thing—when you realize that you are at a point in your life where you are able to dedicate your life to one person, to love that person. As you do your children. So yeah, I guess it’s a little combination. She’s a wonderful girl and I’m very lucky.”

Johnny confirmed that the diamond-studded bling on his left index finger is indeed the ring. “Yeah, that’s the one that is too big for her,” he said with a smile. “That’s why I am wearing it. I don’t want to give it to her. I kept this one. She got the good one. I got the subtler one.” But with Johnny’s cool, unorthodox style, a woman’s ring is not out of place on his finger.

It turns out that there’s another engagement ring. A bit flustered but game to tell the story, Johnny explained to us, “It’s weird. I designed a ring without seeing it. All the various elements—I had made some drawings… I don’t know what numbers mean in terms of diamond size. I really don’t. I do now.

“So I drew this ring and there were specifications. And boom, it went off. It came back to me. Then I realized that the diamond was the size of a human eye. That it might be a little uncomfortable for her to wear sometimes when she is wandering down the street, antique-shopping or going for a juice. So I got her this one, the subtle one. It hasn’t left my finger since. I will get it fitted to her finger and then she can make a decision.”

We visualized a ring with a huge, sparkling rock that would have made the late Elizabeth Taylor excited. Johnny grinned as he said, “Yeah, the other one is a little bit Oh-my-God… it’s one of those. By mistake—it’s just my skewed design.” He said that the ring was made by “a wonderful antique jewelry person in New York City.”

Teased that no woman can be uncomfortable wearing such a big diamond, Johnny laughed and said, “I don’t know. But if you start walking like that (he demonstrated with left arm dropping because of the outsized stone’s weight)… or just waving hello to someone (demonstrated arm dropping again because of the ring’s weight). The glare could burn someone’s retina.”

On French singer-actress Vanessa Paradis, his partner of 14 years, with whom he has two kids, Lily-Rose (turning 15 in May) and Jack (he turned 12 last Wednesday), Johnny said, “Vanessa and I get along wonderfully. There’s no weirdness at all, no hostility. Life happens. We spent 14 great years together and have raised a couple of kids who we are both incredibly proud of. 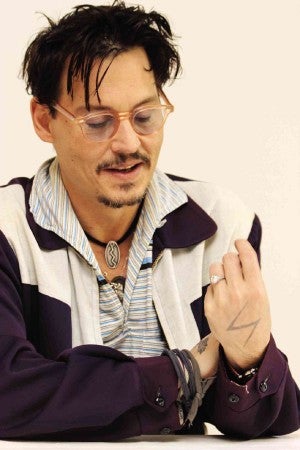 COOL and candid, Johnny Depp gabs about his new love and the “subtle” bling in this interview. Photos by Ruben V. Nepales

“We see each other all the time, giggle and hang out, just like we always did. There are no hassles. Thankfully because she is a wonderful woman. I love her and she loves me. She’s a great woman and mom. I have nothing bad to say, ever.”

The proud dad added about the children, “My kids—I am more and more proud [of them]. Because having lived alongside me in their formative years—most parents’ jobs don’t require that kind of weirdness. The kids have turned out so well. They are good, smart kids. They are polite and caring.

“My boy Jack has always been a very talented draftsman. He draws really super- well. He also plays music very well. He’s got a good feel for that. Aside from school plays and things, he hasn’t shown any desire to become an actor. Whew!

“My daughter, on the other hand, is one of the smartest human beings I have ever known. She has far surpassed myself and my friends. She is just a genius. Lily-Rose is interested in the arts. She is interested in acting, possibly entertaining and singing as well. She’s got the goods. She can certainly deliver. They are both great talents. I wish I could shy them away from it. But the kids are going to make the decisions. It’s what they want to do.”

Will he expand his brood with Amber? “As far as having more kids, it’s easy for me,” he quipped with a grin. “I mean, let’s face it—practicing for it is fun. It’s all wonderful. But yeah, the woman most assuredly and definitely has the big gig. Amber should have the opportunity to have kids if she wants.”

Amber, who’s costarring again with Johnny in “London Fields,” apparently gets along well with the two kids, reported the dad. “It’s been great. They have become super-close, like pals. It’s amazing when you see that thing. You are so proud of your children.”

The 50-year-old actor was effusive as well about the title of his movie “Transcendence,” the feature film directorial debut of Wally Pfister, the Oscar-winning cinematographer noted for his brilliant work with Christopher Nolan—“Inception,” “The Prestige” and the “Dark Knight” movies. Johnny plays Will Caster, a terminally ill scientist who uploads his mind to a computer and makes possible a world where computers can transcend the abilities—and limitations—of the human brain.

“Throughout our lives, we are constantly, if subconsciously, trying to transcend things,” Johnny remarked. “And transcending something as simple as fear, [or] how love for another human can hurt so badly in the best of times—because you love so much that you love so deeply. In a way, transcending that, at least with age and wisdom, learning about life, you are then able to have a distance and perspective on things.

“Transcending fear, pain—stepping outside of the ego—if we could do those things, we would be in good shape. We try. We are only human.”

“What I found most interesting about this film is that when I was first reading the script and started to experience the story, it had this kind of classic feel of sci-fi,” Johnny pointed out. “But as you watch and get further into the story, you realize that it’s actuality. A lot of the technology that was being used… the ability to upload a human consciousness into a giant computer or hard drive is actually just around the corner. It leaves the arena of sci-fi and into a projection of the future which is very different.”

(To be concluded Sunday)

Read Next
She doesn’t mind being called ‘Anne Curtis’ younger sister’
EDITORS' PICK
Writers’ groups join outcry over KWF move
Taiwan’s foreign ministry thanks U.S. for maintaining security in Taiwan Strait
Powered by style, innovation and passion
House energy committee chair Arroyo bats for cheap electricity
A laptop that maximizes your WiFi so you can maximize your productivity
Authors unbowed after gov’t ‘purge’ of books
MOST READ
Arjo Atayde reveals proposal to Maine Mendoza was ‘more than a year’ in the making
Angelica Panganiban, Camille Prats recall ‘trauma’ of being called out for weight gain in ‘G-mik’
‘FPJ’s Ang Probinsyano’ officially ends after nearly 7 years
Most wanted person in Cebu arrested — PNP
Don't miss out on the latest news and information.