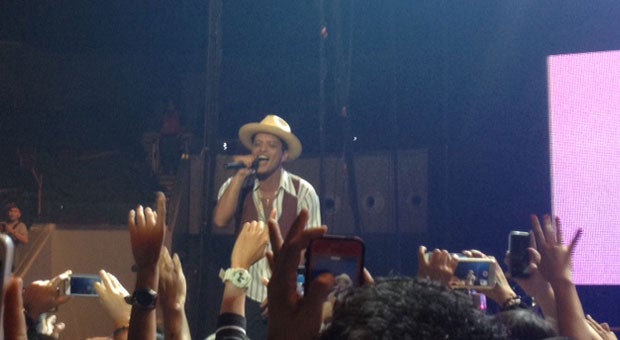 MANILA, Philippines — American singer-songwriter Bruno Mars’ concert Saturday night at the SM Mall of Asia Arena only lasted a little over an hour, but it was nonetheless packed with numbers that prompted nonstop roars of approval and loud sing-alongs throughout.

The 28-year-old music artist from Hawaii set the night’s tone with “Moonshine,” a mid-tempo disco-pop track from his sophomore album “Unorthodox Jukebox.” The show was part of his ongoing world tour “The Moonshine Jungle.”

Backed steadily by his bouncy live band, The Hooligans, Mars sustained the energy with “Nathalie,” before urging his thousands of thrilled fans to put their camera phones for a while, and dance along to the funky beats of “Treasure.”

Mars, Peter Gene Hernandez in real life, marched on with a medley of “Money (That’s What I Want),” “Billionaire” and “I Need a Dollar.” He then sampled Ghost Town DJ’s “My Boo,” Ginuwine’s “Pony” and R. Kelly’s “Ignition” in another mash-up.

Deafening screams pierced through air when Mars sang “Marry You” and altered a few words of its lyrics: “Manila, I think I’m gonna marry you!” He slowed things down with “If I Knew” and “It Will Rain,” and then let crowd sing their hearts out in “The Lazy Song,” “Grenade” and “Just the Way You Are.”

On “When I Was Your Man,” meanwhile, Mars said: “This was the hardest song for me to write and sing.”

For his encore, Mars emerged onstage behind the drums and displayed his chops on the instrument in an exciting solo. All the while the huge screen behind him displayed the Philippine flag. He ended the concert—replete with laser lights, confetti and fireworks—with the hit “Gorilla.”

“Thank you guys so much, you have no idea how much this means to me–performing right here, being a Filipino, and seeing my people,” Mars told the rapt crowd. “I promised you all before, and I promise you all again—we’ll be back very, very soon.”

A day before the concert, Mars, who was born to a Filipino mother and Puerto Rican father, donated a check worth $100,000 to “Yolanda” survivors through a local charity foundation.

Bruno Mars’ mom: ‘I knew he was special the moment he was born’

Bruno Mars returns to Manila for his ‘Moonshine Jungle Tour’