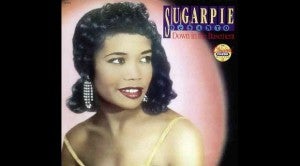 Sugar Pie’s old record “Down in the Basement”

LOS ANGELES – If all goes well, Kanakan-Balintagos’ (formerly known as Auraeus Solito) planned documentary should be a compelling one.

The director has chosen a fascinating subject, Sugar Pie DeSanto, the 4’11”-tall singer-songwriter, who was friends with Etta James (they recorded a couple of duets) and was presented by no less than Bonnie Raitt with the Rhythm & Blues Foundation’s Individual Artist Award.

You just have to see Sugar Pie perform in several YouTube videos from the 1960s to the present. And most interestingly, Sugar Pie’s father turns out to be a Filipino, a manong.

We were not aware of Sugar Pie until Kanakan-Balintagos, who is best known for the acclaimed “Ang Pagdadalaga ni Maximo Oliveros,” told us about her. The filmmaker, who is transitioning into his new name, Kanakan-Balintagos, gave us the links to some of Sugar Pie’s YouTube videos. We were floored when we watched them, from a black-and-white clip of Sugar Pie wowing an audience in England in 1964 to being introduced by Raitt as a “gigantic talent” in 2008. 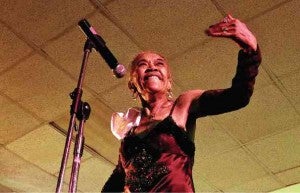 The R&B singer is still energetic at 78. photo: Nathan Dehart

After that intro, Sugar Pie, who was in her early 70s that time, electrified the audience with her singing, doing a back flip and naughty moves.

Suddenly, we wanted to know more about this Filipino-American who toured with James Brown in the early 1960s, had Billboard singles and composed songs recorded by well-known artists, including Minnie Riperton.

That’s why we are excited about “BitterSweet,” the documentary which Kanakan-Balintagos will direct, produce with Jong de Castro, with playwright Benjamin Pimentel as the writer and Sugar Pie’s manager, Jim Moore, as music consultant.

Jong said that he and Kanakan-Balintagos will raise money for their project on Indiegogo, a crowdfunding site, similar to Kickstarter, that helps independent filmmakers obtain public support and funding for their film projects. 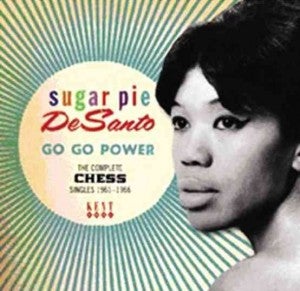 He added that they will offer “great perks” to investors, including opportunities to meet Sugar Pie, screenings of completed parts of the film through a private Internet link, VIP tickets to the docu’s US and world premieres and film wrap-up basement party, master classes in filmmaking from Kanakan-Balintagos, and coproducer and producer credits. The film’s campaign website will be launched soon. (More info about the project is available at www.sugarpiedocumentary.com and www.facebook.com/sugarpiedoc.)

Sugar Pie, now 78, lives in Northern California. With Sugar Pie’s music, her ebullient personality and intriguing and colorful life story, Kanakan-Balintagos’ work is half-done. In Sugar Pie herself, he has everything he needs to make a very interesting documentary. We hope Kanakan-Balintagos succeeds.

Excerpts from our e-mail interview with Kanakan-Balintagos:

How did you first learn about Sugar Pie DeSanto, and what elements in her life made you decide to make a documentary about her?

While browsing Facebook, I saw a clip posted by my producer Jong de Castro of this amazing African-American blues singer performing “Rock Me Baby” at the famous American Folk Blues Festival in London in 1964. I was totally hooked by her performance. I instinctively felt that she had Filipino blood. So I Googled Sugar Pie DeSanto. And yes, my hunch was right! She is half-Pinay! 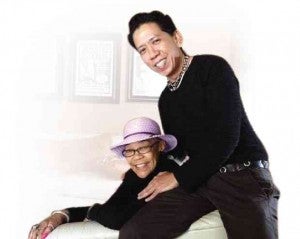 The Pisay (colloquial term for Philippine Science High School) nerd in me started researching all her clips, and I read all the articles about her life overnight. I found out she was Etta James’ best friend. They even had duets.

In 1960, Sugar Pie rose to national prominence in the United States when her single “I Want to Know” reached No. 4 on Billboard’s Hot R&B chart. She received the Pioneer Award from the Rhythm & Blues Foundation. I even found a tragic story about a fire that killed her husband (Jesse Davis). By dawn, I was super-inspired by her story. I wanted to make a film about her.

How did you track DeSanto down? What was your first meeting with her like?

I saw a clip of Sugar Pie on YouTube performing in the streets of San Francisco. On her right was someone who I was sure was a Filipino playing the harmonica. I checked the viewer comments and read one that identified the man as Carlos Zialcita. I immediately checked Facebook, found him and messaged him. He replied within the day. He had seen “Maximo Oliveros” on DVD a week before, and he loved the film. He told me that he and his wife Myrna are very close to Sugar Pie. They immediately connected me and my producer Jong de Castro to Sugar Pie’s manager, Jim Moore. Jong set a meeting right away, and he met with them. 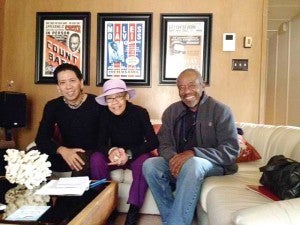 When I was in the Bay Area during the Babaylan Conference, Jong set up a meeting with Sugar Pie and me. The first meeting was simply wonderful; we hit it off right away. Sugar Pie was like a long-lost auntie.

Why is the documentary titled “BitterSweet”? What areas in her life and career will you focus on?

She was born Umpeylia Marsema Balinton. Umpeylia sounds like ampalaya (bitter gourd). She knows what ampalaya means. She was renamed Little Miss Sugar Pie by Johnny Otis (known as “the godfather of rhythm and blues”). From ampalaya to Sugar Pie equals “BitterSweet”; hence, the title.

I intend to explore the history of blues through Sugar Pie’s personal experiences, how she struggled as a Filipino-Asian-Afro-American on the cusp of the civil rights movement, and her experience with prejudice and discrimination.

Once, her husband (PeeWee Kingsley, her first one) was brought to jail because they thought Sugar Pie was white (she is very light-skinned). They were together in a hotel in the south while they were touring what was called the “chitlin’ circuit.” Jim recounted that story to us in a rather hilarious way.

I also want to focus on Sugar Pie’s pure talent. At 78, she still performs! There was a concert and special tribute to her in Norway last year. This year, she is scheduled to perform in New York in the summer.

How much cooperation has DeSanto pledged to tell all, “the good, the bad and the ugly,” as her manager Jim Moore wrote about the project in the film’s website?

Sugar Pie will tell all in this documentary. I will go deep inside her soul to find the roots of her blues. What is in her that makes her such a profound and great performer, to sing in such a soulful way? I want Filipinos and the world to rediscover this hidden gem of a talent who was way ahead of her time. If she was born in the MTV generation, she would have been a greater star. I want the audience to love her, as much as I love her.

What has DeSanto told you about her Filipino heritage, especially about her father? Did DeSanto perform in Manila?

She fondly talked about her Filipino father (Egnacio Bindo Balinton), who was a manong, and what a great and loving man he was, how he loved adobo and how he couldn’t pronounce the “ch” in an English cuss word. We were laughing all afternoon. It was such a funny and loving moment, as if our meeting was destined.

Sugar Pie has never set foot in the Philippines, unfortunately. Through this documentary, I hope she would rediscover the other side of her heritage—that she will visit, meet her relatives and perhaps perform a concert in her other homeland. My films, as you know, are about returning and knowing one’s self.

Will you delve on what I imagine was DeSanto’s double challenge in her time—being African and Filipino?

Yes, this is a very important aspect of my cinema—identity and struggle, rediscovery and healing. It must have been hard during her time, when persons of color were discriminated against in the United States. She was both Filipino-Asian and African-American, yet she managed to exceed the limitations of her times and rose to prominence, thanks to her great talent. She became a pioneer of blues music in the United States.

Will you tackle DeSanto’s friendship with Etta James and why they had different career paths?

Yes, they were best friends. Sugar Pie even told me that she and Etta hung out in her father’s house. And that when they were scolded, they were both asked to kneel on munggo (mung beans)! Was there also professional conflict or rivalry between the two when they were both starting to be known? Did success affect their friendship? We will definitely delve on her relationship with Etta.

Who are among the people whom you plan to talk to and film in this documentary?

Her manager Jim, her relatives in the United States, also famous people who believe in her talent like Aretha Franklin, Bonnie Raitt, Bettye LaVette …  and many other award-winning musicians.

Sadly, many of her peers—legendary musicians themselves—have passed on so we need to hurry up with this project. Of course, Sugar Pie herself. Her personality, like her performances, will bring the house down!

When will you begin filming? Where do you plan to shoot?

I hope to start in a few months after we raise enough [money] for the film. We will follow Sugar Pie around the Bay Area. Hopefully before the year ends, we will have enough footage to edit and create a great documentary worthy of her talent.

After finishing the documentary, you plan to make a narrative feature version. What are your ideas at this stage?

I want the audience to rediscover and love her first. And if the documentary creates great interest, I intend to make a musical based on the songs she herself composed to capture the time when blues was becoming highly influential in the world.