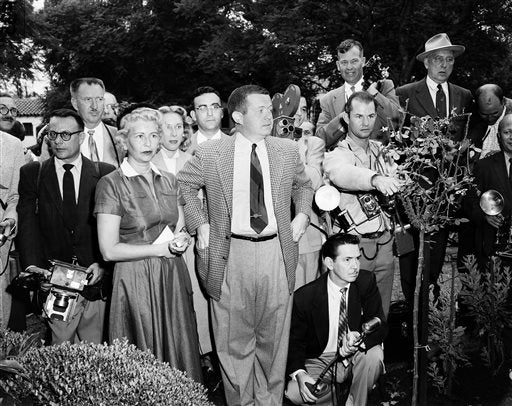 In this Oct. 6, 1954 file photo, Associated Press reporter Bob Thomas, center, and other media wait outside the Beverly Hills house of Marilyn Monroe, after reports that the movie star’s marriage to baseball star Joe DiMaggio was breaking up. Thomas, the longtime Associated Press reporter who kept the world informed on the comings and goings of Hollywood’s biggest stars, died of age-related illnesses Friday, March 14, 2014 at his Encino, Calif., home, his daughter Janet Thomas said. He was 92. AP 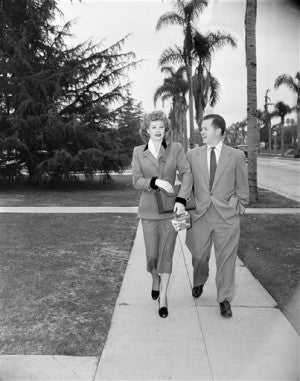 In this June 1950 file photo, Associated Press reporter Bob Thomas accompanies Lucille Ball as she practices the part of a door-to-door saleswoman in Los Angles. AP

LOS ANGELES — Bob Thomas, the longtime Associated Press writer and dean of Hollywood reporters who covered a record 66 Oscar ceremonies, reported on the biggest stars, from Clark Gable to Tom Cruise, and filed AP’s bulletin that Robert F. Kennedy had been shot, died Friday. He was 92.

Thomas, a last link to Hollywood’s studio age who retired in 2010, died of age-related illnesses at his longtime Encino, Calif., home, his daughter Janet Thomas said.

A room filled with his interview subjects would have made for the most glittering of ceremonies: Elizabeth Taylor and Marilyn Monroe, Katharine Hepburn and Spencer Tracy, Groucho Marx and Marlon Brando, Walt Disney and Fred Astaire. He interviewed rising stars (James Dean), middle-aged legends (Humphrey Bogart, Jack Nicholson) and elder institutions (Bob Hope).

Thomas’ career began in 1944, when Hollywood was still a small, centralized community, tightly controlled by a handful of studios, and continued well into the 21st century. During his nearly seven decades writing for the AP, Thomas reviewed hundreds of films and television shows, compiled hundreds of celebrity obituaries and wrote numerous retrospective pieces on Hollywood and how it had changed.

He was the author of nearly three dozen books, including biographies of Disney, Brando and Crawford and an acclaimed portrait of studio mogul Harry Cohn, “King Cohn.” He wrote, produced and appeared in a handful of television specials on the Academy Awards and was a guest on numerous television programs including “The Tonight Show,” ”Good Morning America” and “Nightline.” His biographies of reclusive billionaire Howard Hughes and the comedy team of Abbott and Costello were made into television movies. 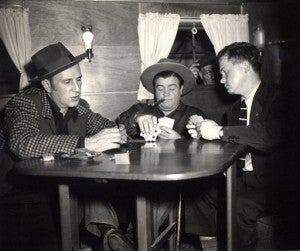 In this circa 1945 file photo provided by Associated Press reporter Bob Thomas, right, plays poker with legendary comedians Bud Abbott, left, and Lou Costello, during an interview. When Thomas began writing a Hollywood column for The AP in 1944, there were 500 journalists covering the movie scene. Fresh, newsy interviews were hard to come by, so he began writing “participation stories.” AP

In 1988, he became the first reporter-author awarded a star on Hollywood’s Walk of Fame.

But one of his biggest stories had nothing to do with entertainment.

Helping out during the 1968 presidential election, Thomas had been assigned to cover Sen. Kennedy on the night the New York Democrat won the California primary. Minutes after declaring victory, Kennedy was shot to death in the kitchen of Los Angeles’ Ambassador Hotel.

“I was waiting in the press room for Kennedy to arrive when I heard what sounded like the popping of balloons in the hotel kitchen,” Thomas would recount years later.

“I rushed into the kitchen where men were screaming and women sobbing,” he recalled. “I jumped onto a pile of kitchen trays and saw Kennedy lying on the floor, his head bloody.”

He ran to a phone and delivered the bulletin to The Associated Press.

As the son of a newspaper editor turned Hollywood press agent, Robert Joseph Thomas seemed destined to become an entertainment writer from his earliest days. In junior high school and high school he wrote entertainment columns for the campus newspaper, and in college his favorite reading was the industry trade paper Daily Variety.

But when he joined the AP in Los Angeles in 1943, it was with aspirations of becoming a war correspondent. Instead, the wire service named him its Fresno, Calif., correspondent, a job he gave up after little more than a year.

“It gets so damn hot in Fresno in the summer and nothing much ever happens there,” he once told a colleague.

He returned to the AP’s LA bureau in 1944 and was soon named its entertainment reporter. He was also told that the byline he’d been using — Robert J. Thomas — had to go. 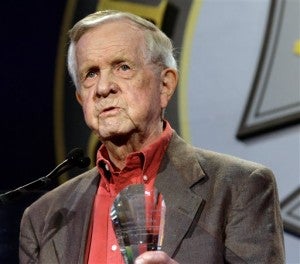 “Too formal for a young guy who’s going to work the Hollywood beat,” he said the AP’s bureau chief told him. “From now on your byline is ‘Bob Thomas.'”

Soon he would become a ubiquitous presence in Hollywood, attending awards shows, wandering studio back lots or going from table to table at the Polo Lounge, Musso and Frank and other favored Hollywood hangouts of the day. The gentlemanly, soft-spoken reporter with the wry sense of humor rarely had trouble getting people to talk to him and enjoyed access to the stars that modern journalists rarely attain, whether visiting with Nicholson at his home or chatting on the set with Tracy and Hepburn.

Although he insisted he never became friends with the people he covered, Thomas did strike up close, long-lasting acquaintanceships with many, and he had the anecdotes to prove it.

There was the time he tried, unsuccessfully, to match the hard-drinking Richard Burton drink for drink on the set of the 1964 film “Night of the Iguana.”

Another time, he showed up for an interview with Betty Grable armed with a tape measure. He had been sent, he told the actress, to determine if her figure had suffered during her recent pregnancy. Grable good naturedly let him measure her.

“Can you imagine doing that with Michelle Pfeiffer today?” he once asked. “In those days, it really seemed like a playground.”

Thomas even received fan mail from the stars. Soon after her marriage to actor John Agar in 1950, Shirley Temple wrote: “John and I want you to know that we are very grateful to you for the manner in which you handled the story on our wedding.”

Some sent telegrams: “Thanks for sending the article to me; I got a kick out of reading it,” Jimmy Durante wrote via Western Union in 1951. “Boy, you’re great.”

Doris Day and Frank Sinatra went months without talking to him after he quoted them candidly in stories, and Tracy cut off contact for years when something Thomas said about him offended the Oscar-winning actor. The fiercely private Brando never spoke with him again after Thomas published the biography “Marlon.”

His encyclopedic knowledge of the industry was well appreciated by his colleagues. A former AP editor, Jim Lagier, would recall that Thomas had a filing system at his home that rivaled that of any news bureau.

“Because if you call Bob Thomas at two o’clock in the morning and say, ‘Bob, Mary Smith has died,’ he would say, ‘Mary Smith,’ and then, suddenly you could hear the filing cabinets were opening. He would start dictating the lead,” Lagier told the AP in 2008 during an oral history interview.

Kathleen Carroll, executive editor of the AP, worked with Thomas in the Los Angeles bureau in the early 1980s.

“Bob was an old-fashioned Hollywood reporter and he knew absolutely everyone,” she said. “He had a double-helping of impish charm with the stars, but back at the office, he was the quiet guy who slipped into a desk at the back and poked at the keyboard for a while, then handed in a crisp and knowing story soon delivered to movie fans around the world.

“Some days, you’d even get a smile out of him before he headed out the door again.”

Through the years, Thomas’ enthusiasm for his profession never waned.

“I get to interview some of the most beautiful people in the world,” he said in 1999. “It’s what I always wanted to do, and I just can’t stop doing it.”

Thomas is survived by his wife of 67 years, Patricia; daughters Nancy Thomas, Janet Thomas and Caroline Thomas; and three grandchildren.