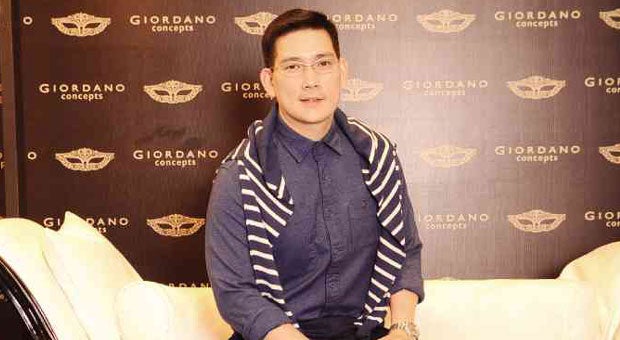 For his fans, Richard Yap will always be “Papa Chen” and “Ser Chief” regardless of the role he is playing.

His breakthrough performances in “My Binondo Girl” and “Be Careful with My Heart” earned him a loyal and still-growing fan base. Despite just a short time in the business, the Kapamilya star also got to release a self-titled album of songs late last year.

The latest feather in the actor’s cap is being picked as apparel brand Giordano’s first-ever Filipino ambassador. The endorsement underscores Yap’s marketability. But although no stranger to product endorsements, Yap’s age was brought up during a recent press con.

He is 46. And the roles he is known for may alienate a younger demographic and attract only a generation who grew up wearing Giordano but switched to other brands when they started working. The company’s target market consists of 20-year-olds to those in their mid-40s.

Melvin Lloyd Lim, Giordano Philippines VP for business development, pointed out: “Giordano is also patronized by dads and moms. We have a customer base for that. We will soon be adding more endorsers for other age groups.

The other endorsers will likely come from other fields, such as the arts.

The actor said he had patronized Giordano since its first store opened in the country in the 1990s.

“The lightweight linen cloth is a luxurious yet under-appreciated material. It is definitely the supreme choice for comfort in hot weather, with its breathability, durability and cool and absorbent properties. Through this collection, we will be reintroducing the practicality of linen and making it an essential part of every wardrobe,” Lim said.

The line is divided into three sub-collections—Ethnic Beat, Nature Burst and Summer Blues.