Filipina in red on the Bafta red carpet | Inquirer Entertainment

Filipina in red on the Bafta red carpet 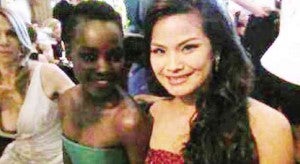 FILIPINO actress Althea Vega got to talk with Lupita Nyong’o (left) who went on to win the Oscar Best Supporting Actress trophy a few days later.

Although it was extremely chilly, Filipino actress Althea Vega felt warm all over on the red carpet of the EE British Academy of Film and Television Arts (Bafta) awards ceremony, where her movie “Metro Manila” was nominated for Best Film Not in the English Language.

All of London had been reeling from a punishing winter and Vega defiantly chose to wear a flaming red tube gown by internationally renowned Filipino fashion designer Ito Curata.

“I was freezing to death, but the moment the ‘Metro Manila’ team stepped on the red carpet, it felt incredible,” she recalled in an email interview while in the United Kingdom. “For a few minutes, I forgot about the weather.”

Curata made two gowns for Vega. “The other dress was beige. Both were beautiful, but I chose the red one because it’s simple and yet elegant.”

She always relished red-carpet events—even back in Manila. “It’s really a thrill to see people smile and to hear them compliment my work.”

At the Bafta dinner party, a group of women approached Vega. “They said that they watched ‘Metro Manila’ with their husbands and they were rooting for it. They had kind words for our film.”

(Italy’s “The Great Beauty” eventually won in the category.)

Later, she was walking on the street when two men approached her. “They called me by my name. We chatted for a while and had photos taken. It was exciting because foreigners recognized me from watching the movie. It proved to me that we made a good film.”

Speaking of souvenir snapshots, Vega had a field day, posing for photographs with Hollywood A-listers at the Bafta—including past Oscar winner Emma Thompson and this year’s Oscar Best Supporting Actress winner Lupita Nyong’o.

As luck would have it, the “Metro Manila” crew was seated near Nyong’o.

“I said hello to Lupita and her mom, who was seated beside her,” Vega recounted. “I introduced myself and congratulated her for her work on ‘12 Years a Slave.’”

Thompson was just as gracious as Nyong’o.

“They were very nice and were happy to pose for photos with me,” she looked back.

There were a few stars who got away, however.

“There were lots of celebrities at the event, mingling freely,” she explained. “Some were more private and not as approachable. Oprah Winfrey was friendly, but declined photo requests. I saw Angelina Jolie, one of my favorites. But I didn’t have the courage to approach Angelina, who was with her partner Brad Pitt.”

The entire Royal Opera House was brimming with “positive vibes,” she exclaimed.

Vega felt strongly about attending. “I’m proud to represent the Philippines in London. The movie was shot entirely in our country, and it featured Filipino talents. It was important for me to showcase our culture and our country—no matter how harsh reality can sometimes be.”

All in all, Bafta was unforgettable. “Days later, it’s still fresh in my mind,” she said. “It’s a moment that I will treasure for the rest of my life.”