Party all the way at Panagbenga ’14 | Inquirer Entertainment

Party all the way at Panagbenga ’14 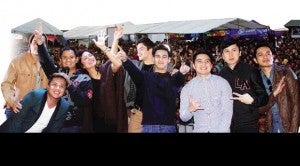 BAGUIO CITY—Amid the hustle and bustle on Sunday, final day of the monthlong Panagbenga Festival, TV5 stars mounted a fun show for the swarms of people doing last-minute shopping and merrymaking on Upper Session Road, the city’s main street.

Dubbed “Every Day All the Way sa Panagbenga 2014,” the Kapatid event—part of the annual festival’s closing ceremonies—was led by the cast members of “Confessions of a Torpe,” “One of the Boys” and “Beki Boxer.”

The regional road show was TV5’s third event this year, after Iloilo City for the Dinagyang, and Cebu City for the Sinulog.

Melvin Nubla, head of network marketing, said his team intended to visit cities around the country to boost TV5’s presence in different regions. “We want to improve our visibility in various key cities this year.”

“Having the stars interact with fans is important,” Nubla told the Inquirer, adding that TV5 will be present in other festivals as well.

After meeting with regional reporters at a press con, TV5 talents Ogie Alcasid, Alice Dixson, Wendell Ramos, Albie Casiño and Mark Neumann (“Confessions of a Torpe”), Eula Caballero and the boys of “Juan Direction” (“One of the Boys”),  and Alwyn Uytingco (“Beki Boxer”), proceeded to the show venue where a big crowd awaited them.

Ogie was met with applause as he serenaded the fans—some from neighboring provinces—with “Bakit Ngayon Ka Lang.” He then gave away goodies. “’Di niyo na yata kailangan eh!” he jested.

Albie and Wendell made not a few ladies swoon by granting “selfie” requests from those who got close enough. Alwyn urged everyone to join him as he sang “Lovesong” by The Cure.

“Having a show like this is a nice treat, not only for the fans, but also for us,” she said. “Some fans come to visit us on the set, but we don’t usually get to interact with them because we’re busy. This way we are able to mingle with them, say hello, shake their hands. It’s nice to know that our shows are being watched here.”

Playful hunks
Surprisingly, it was the five Filipino-British hosts of the documentary-style reality program “Juan Direction” that turned out to be the show’s biggest draws, as they reduced the crowd to fits of riotous laughter by reciting Tagalog tongue twisters.

The group, composed of heartthrobs Michael McDonnell, Charlie Sutcliffe, Daniel Marsh, Brian Wilson and Henry Edwards played a game of paper dance with giddy female fans and their “One of the Boys” leading lady, Eula.

Aside from organizing regional shows, Nubla said, TV5 was devising other ways to expand its reach.

Asked if there were plans to set up a local station in Baguio and other cities, he said: “That’s already in the pipeline… We are constantly thinking of new ways to improve our coverage.”