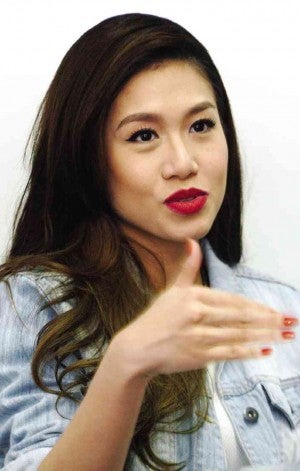 RACHELLE Ann Go, who plays Gigi in the coming revival of “Miss Saigon,” stars in a send-off concert on Feb. 22 at Meralco Theater. RODEL ROTONI

All she ever wanted to do was sing, record one album and star in one big concert. Rachelle Ann Go did all that—and then some, after winning the 2004 singing contest, “Search for a Star.” For a while, the 27-year-old thought that was it, she couldn’t ask for more. She was wrong.

Throughout her 10-year career, Rachelle Ann has experimented with different music genres like pop, rock and R&B. She did a bit of TV acting as well. She has realized that, sometimes, a person can’t really tell what he/she wants, until it presents itself.

In 2010, while vacationing in Canada, Rachelle Ann was taken by relatives to watch the Toronto staging of Claude-Michel Schönberg and Alain Boublil’s “Miss Saigon,” which catapulted Filipino artist Lea Salonga to stardom in 1989, when she played the lead role of Kim. Rachelle Ann fell in love with the musical.

“I envisioned myself doing theater, and felt convinced that I’d do exactly that someday,” Rachelle Ann said during a multi-platform interview at the Inquirer head office in Makati City.

Sure enough, Rachelle Ann—despite a limited knowledge of theater and acting—found herself auditioning for Atlantis Production’s staging of “The Little Mermaid” the following year. “One of the directors, Bobby Garcia, urged me to just try it,” she related.

Rachelle Ann’s performance as Ariel earned rave reviews, engendering a resolve to “do at least one musical per year.” The confidence stopped short at the door to the tryouts for the West End revival of “Miss Saigon,” which opened auditions in Manila in late 2012.

But with much encouragement from family and friends—including Lea Salonga—Rachelle Ann gave it a shot. “Ms Lea told me the one thing I might regret was not trying,” she said.

After a series of auditions in Manila and in London, Rachelle Ann won the role of Gigi, the hardened Saigon bar girl, whose shining moment in the musical is a duet performance (with Kim) of the heart-wrenching “The Movie in My Mind.” 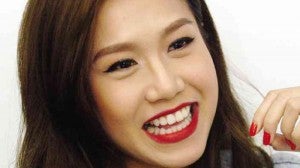 RACHELLE Ann Go, who plays Gigi in the coming revival of “Miss Saigon,” stars in a send-off concert on Feb. 22 at Meralco Theater. RODEL ROTONI

She didn’t experience the meteoric rise that her contemporary, fellow singing champion and good friend Sarah Geronimo enjoyed. But, Rachelle Ann, now sees that, all this time, there was a different plan for her. She has become a firm believer in destiny and next month, she will fly to London to fulfill hers.

I have to be! The show opens in May.

What do you want to accomplish before leaving for London?

I will have a send-off concert at the Meralco Theater on Feb. 22. Then hopefully I get to rest and spend time with my family. I’ll be in London for 14 months … that’s not a joke.

Tells us about the concert.

It’s my 10th year in the biz and I want to share all I’ve done—pop, rock, revivals, musicals …

How did the London tryouts go? Did you see the others audition?

We were asked to stay in the dressing rooms. You couldn’t hear the other performances from there. The Thai girl from Sweden who went before me was also vying for the role of Gigi. She’s so beautiful, sexy and all dolled-up—eyelashes, curly hair. I didn’t think I had a chance.

Was there also an interview?

Yes, with producer Cameron Mackintosh, and my mind was floating throughout. He asked if I had friends in London. I said no, to which he replied: “Well, you will now.” I was like, “Oh my God!”

He asked what my dream roles were, but I was too shy. He asked if I wanted to work there. I said, “Of course!” They asked if I was willing to leave my TV show (GMA 7’s “Sunday All Stars”) and concerts here in Manila. I just said yes to everything! 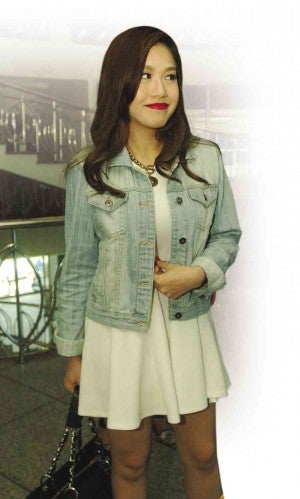 THE SINGING champ visited the Inquirer office before her UK trip. RODEL ROTONI

They [assessed] my jazz dancing skills, which are nonexistent!

How did your parents react when you received word from London?

I was checking my email and saw a notification for “Miss Saigon.” It had been 11 months since the audition; I thought it was a joke. I called Direk Bobby, who assured me that it was the real thing. It didn’t sink in immediately. I tried hard not to shake when I told my mom. She was very calm, but I knew she was excited. I didn’t respond to the email until after a week, after I had thought long and hard about it.

What did you think about when you finally settled down?

It dawned on me that I’d have to wear a bikini! I called up my (Christian church) pastor and asked if that was okay.

Have you ever worn a bikini?

Not even to the beach! I asked some past Gigis if I could wear stockings (underneath). Ms Lea said people would not remember what I wore, but how I sang. I’ll probably get used to it. I am told that flat abs weren’t such a big deal at the time of “Miss Saigon.” Still, I work out to be physically ready.

Ms Ima Castro (who played Kim) pointed out that, if I were playing Kim, I would have kissing scenes.

You were in the recent concert “Do You Hear the People Sing?” Did you get to work with (“Miss Saigon” creators) Michel-Claude Schönberg and Alain Boublil?

They were there during rehearsals. Mr. Schönberg observed me closely because I was to sing the character Ellen’s new song, “Maybe.” They wrote it for the West End revival, and it was the first time the song was going to be performed. I was so nervous I wanted to just disappear.

I met him last year in London. I was intimidated because he seemed so stern. After my audition song, he went onstage and told me what he wanted me to do with the piece. But he was so nice during the rehearsals for DYHTPS. I had a one-on-one session with him. The pressure was tremendous.

Would you consider that a preparation of sorts for “Saigon”?

It gave me an idea what to expect, working with them. I was very nervous singing “Maybe,” I almost cried. But Mr. Schönberg was very happy and said, “You are my star!” It was overwhelming.

Are you prepared for London life?

It’s my first time to be alone, and I can’t cook or do the laundry! Perhaps God gave me this gig because he wanted me to grow up.

What are you fears?

Being homesick—and I probably will be in the first three months. But we will be rehearsing every day—I hope that helps. And there will be other Filipinos, too. I’ll miss rice; maybe I should bring a small rice cooker!

What’s the longest you’ve been away from home?

One month for a concert tour … but my mom was with me.

Who’s visiting you in London?

Many people have promised to drop by. Ms Lea said she’d be there in September. My friends are very excited, but they will have to go in batches so I will have visitors regularly.

What tips did you get from former “Saigon” actors?

Jinky Llamanzares, who played Gigi in Canada, said I should always do my best, because “Saigon” could open a lot of doors. Ms Lea offered no advice about singing and acting because, she said, those were up to the director. She did remind me, though, that I should continue taking singing, dance and acting classes.

I may also take up a business course.

Was it a deliberate effort on your part to take your time before reaching for the stars?

Nothing was planned. All I wanted to do was sing.

What will happen to your love life?!

Do you see yourself doing more theater after “Saigon”?

I’m not sure, but this is a big chance for me to grow as an artist. I’m excited about what I’m about to learn.

Is this your highest paying gig so far?

Not really. But this is not about the money. When I got the role, I didn’t ask about talent fee or other details. The only things that came to mind were London and West End. I’m willing to still do it without pay—a food allowance would be enough!

Which skills do you still want to improve on?

I want to continue with voice lessons. Ms Lea has been singing for many years but she still takes lessons. I also have to take care of my voice because it can be very cold in London.

What about your acting?

Sir Bobby and Direk Charee Arespacochaga helped me a lot in that department when I worked with them. I’d like my acting to be natural, not too technical.

Do you think this is the biggest achievement for a member of the Singing Champions circle?

We’ve had our own successes: Christian Bautista has been doing well around Asia and Sarah Geronimo has achieved so much and reached so far. We have individual career paths.

You never felt left behind at any time?

I’m happy doing albums and concerts. I make no demands or requests. I just go with the flow. I’m happy with what’s given to me.

Read Next
This accidental director wanted to be a doctor
EDITORS' PICK
A gem of a residence in the new normal
PNP: Checkpoints back in MECQ areas
Water remains our saving grace right now
Been there, done that but what’s the difference between MECQ and GCQ?
BREAKING: 3,226 latest COVID-19 cases bring PH’s total to 106,330
Smart 5G goes live
MOST READ
MECQ guidelines in infographics
Citing Duterte order, Lorenzana says PH won’t join other navies in South China Sea drills
Lacson takes up cudgels for health workers ‘threatened’ by Duterte
Want higher pay? Join the police force, Duterte tells nurses
Don't miss out on the latest news and information.