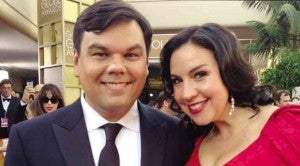 LOS ANGELES—“Pinch us!” exclaimed Filipino-American Robert Lopez, on the news that “Let It Go” (from “Frozen”), which the Tony Award-winning composer (“The Book of Mormon,” “Avenue Q”) wrote with his wife, Kristen Anderson, earned an Oscar Best Song nod last Thursday morning. Robert and Kristen were among the film talents who woke up to learn that their names were among those announced as 2014 Oscar nominees by actor Chris Hemsworth and Academy president Cheryl Boone Isaacs in an early morning ceremony at the Samuel Goldwyn Theater in Beverly Hills.

“We couldn’t be prouder to see our song ‘Let It Go’ receive an Oscar nomination,” Robert and Kristen said in a joint statement. “It’s a reflection of all the effort that went into the song from the dozens, if not hundreds, of people at Disney Animation who added their talents to it. We hope the song and its message of empowerment continue to spread. We are so grateful to the Academy, to our directors and producers, to Idina Menzel and to the people all over the world who are listening (and sometimes belting along) to the music of ‘Frozen.’ Sing out!”

“Frozen,” helmed by Jennifer Lee (the first female director of a feature length Disney animation film) and Chris Buck, bagged a best animated feature film nod. Jennifer and Chris said, “‘Frozen’s’ journey has gone beyond our wildest dreams. We thank the Academy for this honor and look forward to celebrating the nominations with our crew at Disney Animation today.”

Leonardo DiCaprio, whose performance in “Titanic” was snubbed by the Academy, earned his fourth Oscar nomination, thanks to his showy part in Martin Scorsese’s “The Wolf of Wall Street.” He gushed, “I am deeply humbled by this honor and even happier to share [it] today with Marty (Scorsese), Jonah (Hill), Terry (Winter, writer) as well as the entire cast and crew. ‘The Wolf’ has been a passion project of mine, and I found the role to be one of the most challenging and rewarding of my career. Congratulations to all of my fellow nominees and thank you to the Academy for this extraordinary recognition.” 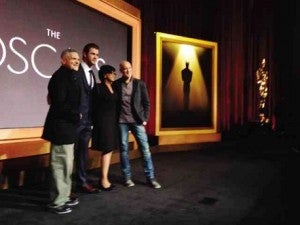 One of Leonardo’s rivals for the Best Actor trophy is “Dallas Buyers Club’s” Matthew McConaughey, a contender in his portrayal of Ron Woodroof, a real-life homophobic HIV-stricken Texan who teams up with Rayon (a fictional character played by Jared Leto), an AIDS-battling transsexual, for a business that involves smuggling unapproved AIDS drugs from Mexico.

“I am honored and grateful for this nomination,” said Matthew. “I love working in an industry and craft that inspire me daily and allow me to tell stories that translate humanities and move people. I share this with the entire ‘Dallas Buyers Club’ family of filmmakers, cast and crew—and the real-life Ron Woodroofs and Rayons who continue to fight and live with dignity. Thank you.”

Jared commented about his Best Supporting Actor nod—his first Academy nomination: “I am absolutely blown away by this incredible nomination. I never in my life thought I would have the opportunity to even write these words. Thank you so much to all my fellow AMPAS acting branch members for this honor. Today, you not only honor me but also all those around the world living with AIDS and all those we have lost to this disease. Thank you for recognizing them and recognizing their struggle through ‘Dallas Buyers Club.’

“This was a fascinating story told by a group of incredibly passionate and committed filmmakers who wanted to create something special and shine a light on a unique and important story. I’m proud to be a part of this celebration and so very grateful to you all. A huge congratulations to Matthew McConaughey, Robbie Brenner, Rachel Winter, Craig Borten, Melisa Wallack, Jean-Marc Vallée, Martin Pensa, Adruitha Lee and Robin Mathews.”

Sandra Bullock remarked about her Best Actress nod for Alfonso Cuaron’s “Gravity”: “I had already felt overwhelmingly blessed to have had the creative ‘once-in-a-lifetime’ opportunity … in ‘Gravity.’ The life experience I garnered on this journey is something for which I will forever be grateful. Thank you to the Academy for including all of us amongst nominees who have left us in awe with their work last year.”

For his part, Best Director nominee Alfonso remarked, “Thank you, Academy, for this incredible recognition. These nominations are not just about single achievements, but rather the collective effort of hundreds of dedicated artists who made this dream a reality. On behalf of everyone involved with ‘Gravity’ I want to express our deepest gratitude to the industry, the exhibitors and the public for embracing this film so passionately. A special thank you to our friends and collaborators at Warner Bros. for staying on board this journey for more than four years.”

Of Sandra, who took on the role reportedly first offered to Angelina Jolie, Alfonso said: “I am particularly moved by Sandy’s nomination. She is the heartbeat of our film. She immersed herself in the part. And I thank her for her grace, trust and dedication to finding the truth of this character.” 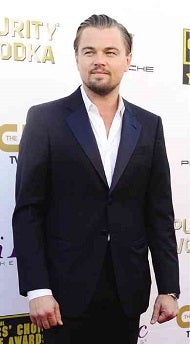 LEONARDO DiCaprio on the red carpet for the Critics’ Choice Awards, where he won Best Actor-Comedy. AFP

Lupita Nyong’o scored her first Oscar nod (for Best Supporting Actress) via her portrayal of a young slave in Steve McQueen’s “12 Years a Slave,” which depicts the true story of Solomon Northrup, a free black man who is kidnapped and sold into slavery. Lupita said, “I am thrilled beyond words that the Academy has recognized my performance … and I am deeply proud to be in the company of my fellow nominees. This celebration of such an important film is simply extraordinary, and I am so pleased to be able to share it with the rest of the ‘12 Years’ family. I feel truly blessed!”

On “12 Years’” Best Film nomination, producers Brad Pitt, Dede Gardner and Jeremy Kleiner, issued this joint statement: “We are immensely grateful to the Academy … Solomon Northup’s story is a testament to the endurance of both a man as well as narrative, for which movies were borne. We feel so privileged to have had a small part in its telling. The lion’s share of credit goes to Steve McQueen, Chiwetel Ejiofor, Nyong’o, Michael Fassbender, John Ridley, Joe Walker, Patricia Norris, Adam Stockhausen, Alice Baker and the cast and crew and the city of New Orleans, for whom resilience is a muscle—may we all learn it, before we need it.”

Best Actor nominee Chiwetel Ejiofor commented, “At no point during filming, in the sweltering heat of New Orleans, did any of us ever foresee the journey this film would take us all on. Steve created an entire family to tell one man’s tale and I am delighted that so many of this family have also been recognized today. I am hugely grateful to the Academy for this great honor, and, of course, to Solomon Northup for sharing his story through his breathtaking book.”

Both Tom Hanks, who anchored “Captain Phillips” (which earned a Best Film nomination) in the title role, and director Paul Greengrass, were snubbed by the Academy. The film’s co-producer and co-star made sure to credit both in their reaction quotes.

Dana Brunetti said, “We’re so incredibly proud of this film and the team we assembled both in front of and behind the camera. Simply put, we could not have done it without the enormous talent of Paul and Tom. It was an honor to be able to tell the heroic story of Captain Richard Phillips and the US Navy SEALS who rescued him.”

Barkhad Abdi, whose big break in “Captain Phillips” has catapulted him from limo driver to Oscar Best Supporting Actor nominee, said, “I am truly honored to have been nominated … This has been a life-changing experience for me. I would like to congratulate all of the nominees this morning, especially the team from ‘Captain Phillips’ who were recognized. My performance is a testament to the vision of our incredible director Paul Greengrass, and our other Captain—the generous, amazing, and inspiring Tom Hanks.”

Alexander Payne, a Best Director nominee for “Nebraska,” a black-and-white film starring Bruce Dern, June Squibb and Will Forte, which got a Best Picture nod, said, “How can I be anything but grateful and elated that ‘Nebraska’ received Oscar recognition amid a year of such terrific films? Well, I can’t. I’m proud to be in the company of those other movies, and as much as I’m happy about Bruce and June’s acting nominations, I’m particularly ecstatic about Phedon Papamichael’s deserved, overdue first nomination for Best Cinematography.”

Bob Nelson, nominated for Best Screenplay, also for “Nebraska,” revealed a portrait of Hollywood in his reaction quotes: “It’s amazing to me that a simple script I wrote as a writing sample to get a job in Hollywood has become all this. And to think that just 10 short years ago, executive producer Julie Thompson read the script and thought it might be a good fit for Ron Yerxa and Albert Berger at Bona Fide Productions. And they had the great idea to send it to Alexander Payne, who they worked with on ‘Election,’ to see if he might know an up-and -coming Midwest director to help us make a $2 million film.

“But when Alexander called and said he’d like to do it, everything changed. With a crew that he’s worked with for years and his often unexpected but always spot-on casting, he took a very simple story and elevated it to a whole other level. I’m so grateful to everyone who worked on this film, especially those who were out there in the frozen fields of the Midwest while I sat comfortably in my home in the Northwest.

“And Bruce Dern—brilliant. The guy has got game. June Squibb—taking what’s on the page and adding to it with her years of theater work behind her that she brought to the set. And who would have thought of Will Forte? Will Forte says he certainly didn’t, but I really appreciate the subtlety he brought to a son who wanted to give his dad some dignity. And then there’s Stacy Keach, one of our best Shakespearean actors who played the bad guy with such intensity and finesse, and Bob Odenkirk who left Saul behind and brought such an energy to each scene he’s in, and Rance Howard and Angela McEwan who elevated every scene they were in as the residents of small town America.

“Paramount and their people on the ground got the word out on this film. I get emails from them long into the night. This has been an incredible morning, with lots of calls and emails from Seattle to LA.”

Bob ended with a humorous point: “And then I got an email from Sears telling me I’ve earned $5 in points, so this has been a really great day so far. And it’s not even eight o’clock.”