‘Yolanda,’ Zen and the art of surfing

Rafael Rosell’s vacation has allowed him to commune with nature and reunite with relatives in typhoon-devastated Cebu
By: Bayani San Diego Jr.
Philippine Daily Inquirer / 02:35 AM January 17, 2014

“Over 80 percent of the homes were damaged,” he said. “Since most of the houses had no roof, we had a street party instead.” 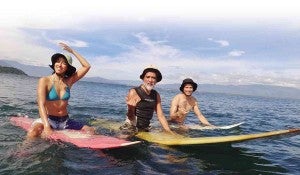 Christmas in Cebu taught him that “joy can overpower sadness.”

“More than material things, love is more important,” he said.

He stumbled on the same lesson during his vacation from show business last November. The holiday was a welcome respite as he was due to start work on the new GMA 7 afternoon soap, “The Borrowed Wife,” which begins airing on Jan. 20.

The break allowed him to commune with nature.

After wrapping up work on the Kapuso soap “Maghihintay Pa Rin” and the indie film Alvin Yapan’s “GayDar,” he went on a surfing trip to Baler, Aurora, where he discovered a different facet of the sport, courtesy of friends, actress Mara Lopez and her father Hiroshi Yokohama.

He calls Yokohama his surfing “sensei” (teacher); Lopez’s dad acts as his mentor in the sea.

He used to regard surfing as a sport for the entire barkada—rowdy and free-wheeling.

Lopez and Yokohama taught Rosell that surfing could also be meditative. “They introduced me to soul surfing,” he recalled.

In Baler, he would wake up at the crack of dawn and paddle to the ocean, to witness sunrise. 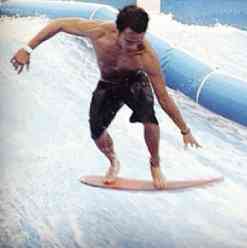 “While in the sea, I would say a prayer,” he recounted. “In soul surfing, you’re all alone. It’s just you and the waves. You’re able to connect with the ocean, find your soul and commune with nature.”

He and the Yokohamas were in Baler for six days.

“We were there when Typhoon Santi hit last October,” he related. “Electricity was cut off.”

They had to survive with the barest of necessities. “Mara influenced me to go on a raw-food diet. We ate only fruits and coconuts. It was quite an experience. I enjoyed myself.”

Rosell and Lopez are best buddies. There was nothing romantic going on between them, he insisted.

“She’s like a sister to me. I’m aware of those rumors,” he owned up. “Friends tease me because I rarely pose with girls on Facebook and Instagram photos.”

Their snapshots are posted all over cyberspace; thus, fueling the speculation.

“When I surf with her, I feel safe. She knows everything about the ocean,” he said. “She’s cowboy. She rides the bus to Baler. She knows the locals and made me a part of that surfing family. I learned so much from her and her dad. It’s such an honor to be part of this Japanese ninja clan.”

Recently, he went on a tree-planting expedition to Iloilo, too.

“We should help nature heal itself,” he said. “The more we destroy it; the more we’ll suffer.” 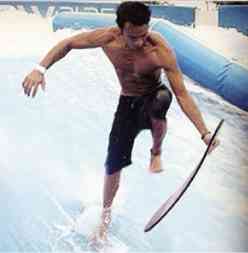 He explained that trees could lessen the impact of landslides and other calamities.

“It’s a karmic way of living,” he pointed out. “Mangroves help coastal communities become less vulnerable to typhoons and earthquakes.”

He said that he initiated the tree-planting session with a group of fans.

“It’s my way to give back,” he remarked. “Call me a hippie, a tree hugger. People may laugh now, but in the end I hope they’ll realize the importance of trees.”

Although the environment is “a serious cause … we are having fun protecting it.”

Surfing and tree-planting led to a slew of realizations, too.

Surfing made him more analytical for one, he said. “I’m more conscious about my feelings. Before reacting emotionally, I analyze things first. One of our society’s problems is that we’ve become too melodramatic. I guess, it’s because of the tearjerkers we watch on TV.”

Spending time with nature has also made him realize that “what we have in the city is just an illusion,” he quipped. “All the material stuff that TV commercials tell us to aspire for … we don’t really need those things.”

For him, it’s time to go back to basics.

“We live in the Philippines. I don’t think we should live like Americans. We just need good food … good farms. Our country is rich in resources. We live in a beautiful country. We should not ruin it.”

Read Next
2014 Golden Globes’ standout moments
EDITORS' PICK
Notice of 2020 regular meeting of stockholders June 18, 2020
SM prepares for ‘safe malling’
Leveling up your ‘lutong bahay’ with the kitchen companion you never knew you needed
NBI, Immigration to join hunt for ‘underground’ medical clinics
2 Chinese nationals arrested in raid on another unlicensed COVID-19 hospital in Pampanga
P2.2 trillion in losses: Cost of COVID-19 impact on PH economy
MOST READ
NCR is ready for GCQ — Palace
Revillame tells Roque: ABS-CBN is in my heart despite being in rival network
Filipino kids in Ireland orphaned due to COVID-19
Metro Manila mayors told: Keeping bus, jeepney ban ‘catastrophic’
Don't miss out on the latest news and information.