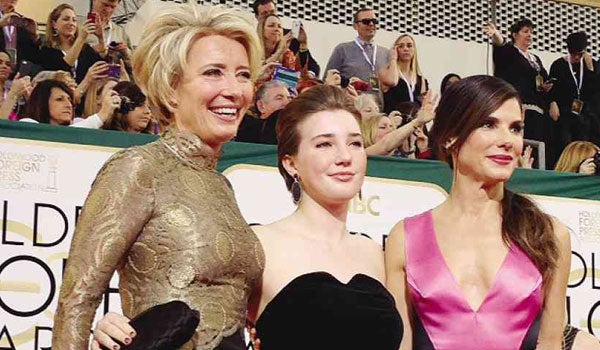 LOS ANGELES—In the end, the quiet moments amid last Sunday’s Golden Globe Awards madness on the red carpet, in the jampacked ballroom and the after-parties, were the ones that stood out in our minds.

Diane Keaton, who accepted the Cecil B. DeMille Award on behalf of her longtime pal and collaborator Woody Allen, suddenly broke into a scout campfire song that for once shushed the star-studded crowd with these lyrics (she changed them a bit): “Make new friends/but keep the old/One is silver/the other is gold/A circle is round/it has no end/That’s how long/you’re going to be my friend.”

It was an apropos song for us as well, since we had as guests friends all the way from the 1980s and recent ones.

Earlier, in the midst of the screams of the photographers calling the stars to pose for them and the pressure-packed atmosphere, further intensified by the bright spotlights, an actor nominee walked straight toward us and whispered that he was very nervous. He later won.

Adele Exarchopoulos, the sultry star of the controversial lesbian love drama, “Blue Is the Warmest Color,” a Best Foreign Language Film nominee, seemed dazed by it all. Sporting a sexy pout, her hair in a ponytail, Adele was strangely not prominently featured in the mainstream US media. With a dramatic keyhole slit in the back of her gown, Adele left us temporarily dazed, too.

Best Actress (Drama) winner Cate Blanchett was every inch a Hollywood movie star, regal and quietly elegant. She’s the only one of her kind. She was easily the best dressed. And blessed with graciousness, Cate simply stood out. 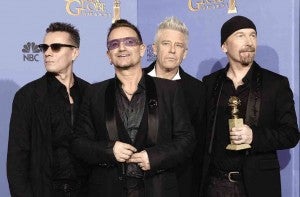 STARS wanted to sit near U2, who won Best Song for a film on Nelson Mandela—the band’s longtime hero.Getty Images/AFP

When U2 materialized on the red carpet, our buddy appeared from out of nowhere too. Our resulting photo with Bono, The Edge, Adam Clayton and Larry Mullen, Jr. is something we’ll share with our grandkids and great grandkids who maybe wouldn’t have a clue who these four dudes are. Or, given the breadth of U2’s music, the kids will probably have respect for the band.

Just how cool is U2? A week before the show, even the stars were asking how close their tables would be to that of the band.

Disney and Pixar’s John Lasseter, out of his trademark Hawaiian shirt and wearing a tux, said it was his birthday and jokingly expressed gratitude that all this big to-do was in his honor.

In and out of the ballroom, Best Actress (Drama) nominee Emma Thompson, accompanied by her lovely daughter Gaia, 14, was one of the most gregarious. She bantered with Sandra Bullock and broke into hearty laughs on the red carpet. Inside the International Ballroom, the friendly actress chatted up many guests and stopped by the table of fellow British and another Emma—Watson.

Onstage as a presenter, Emma (Thompson), holding a martini and her Louboutins slung over her shoulder (which she tossed away later), exemplified why the Golden Globes are such fun affairs—loose, carefree and never pompous. 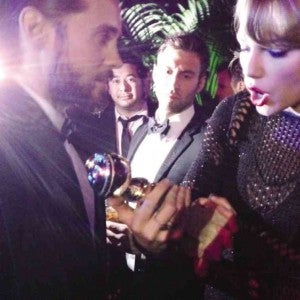 Taylor was with her BFF, Oscar-nominated (“True Grit”) Fil-Am actress Hailee Steinfeld—who came with her mom, Cheri, whose family roots come from Bohol. Another Fil-Am actress, Vanessa Hudgens, danced with this crowd and bolstered this bash as always among the best ones which went on simultaneously within the Beverly Hilton.

Jacqueline Bisset, having recovered from her triumph as Best Supporting Actress in a Series, Miniseries or TV Film, gracefully danced with a partner.

At the Weinstein party, Best Supporting Actress nominee Lupita Nyong’o, sporting a dazzling smile wherever she went, was as warm as her eye-catching red gown. We wish her a very bright future in cinema.

At the HBO party, always our last destination but certainly not the least, Jamie Chung joyfully announced that she just got engaged and introduced her fiancé to us. Did you know that Jamie had barely settled for a vacation in Boracay when her agent called and asked her to return to the United States, pronto, to audition for the first “The Hangover”? Jamie reluctantly left the fabled Philippine island. With three “Hangover” films under her belt, Jamie can maybe spend her honeymoon in Boracay without interruption from her agent this time.

What red carpet flooding from a sprinkler malfunction are you talking about? In typical Hollywood fashion, a soaked portion of the red carpet was dry and camera ready in no time at all. Like that gushing water that had earlier threatened to mess up the whole star arrivals did not happen at all. Only in Hollywood, folks.