This ‘Dyesebel’ is childlike, edgy 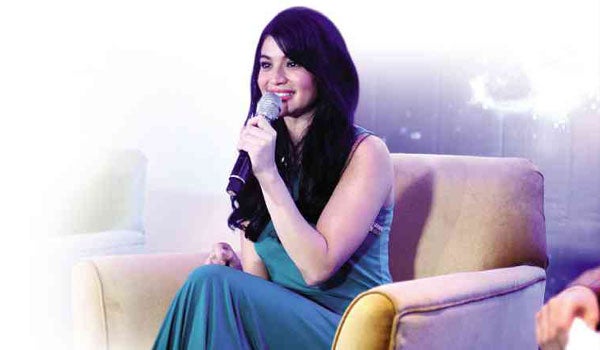 ANNE Curtis at the press con

It didn’t take too much or too long for Anne Curtis to get all choked up at the recent media gathering that presented her as the star of ABS-CBN’s coming TV adaptation of “Dyesebel.”

The event was Anne’s first major press appearance since late last year, when reports of her infamous drunken night-out at a bar surfaced. From the get-go, the usually effervescent actress, so used to being in the spotlight, seemed a trifle too edgy.

One moment she was cracking jokes in that child-like squeak; and in the next, struggling to articulate her thoughts as she fought back tears. Whenever emotions threatened to get the better of her, Anne, almost instinctively, let out a high-pitched squeal.

Anne, who had just arrived from a vacation in Canada, said she learned about the offer only a day before the press con. “It’s overwhelming that, after a tough 2013, I came back to find that something good was going to happen,” said Anne, her voice trailing off before turning weepy.

Reports of that bar altercation alleged that Anne, having had one drink too many, slapped fellow ABS-CBN artist John Lloyd Cruz and called him an “addict.” While the popular 28-year-old actress acknowledged that the incident was a humbling and learning experience for her,  she said she would rather put the memories of that scandal behind her and focus on the new TV project.

“I want to leave all the negativity of 2013; this year is going to be great,” she said.

The bar incident stirred up a whirlwind of comments on social networking sites—some biting and critical; others, comforting and encouraging. Anne said she was grateful to have been entrusted with the role of “Dyesebel” despite everything said about her.

“I’d like to thank everyone who believed I could do this, people who kept faith in me and didn’t forget [good things that I’ve done] despite that one unfortunate mistake,” Anne said. “And to those who didn’t, God bless you. Everyone has something to say; you can’t please everybody.”

Anne is no stranger to playing a TV mermaid, having played the mythical aquatic creature in the 2008 fantasy series “Dyosa.” Even so, Anne was positive that “Dyesebel”— created by famed graphic novelist Mars Ravelo—would be an entirely different experience for her.

“‘Dyesebel’ is a classic and is part of Philippine pop culture. It’s something I’ve never done before,” she pointed out. “I’ve always wanted to do this since I was a kid—this is another dream come true for me. This is one amazing thing that I’ll always keep—and, hopefully—share with my [future] children.”

According to Dreamscape, the ABS-CBN business unit that will produce “Dyesebel,” Anne was selected after topping a series of surveys.

At one point, Anne drew laughter from the crowd after doing an impression of Ariel’s singing voice (from the Disney cartoon “The Little Mermaid”). “Will I be recording the theme song?” blurted out Anne, who will be joined by matinee idols Sam Milby (as Liro) and Gerald Anderson (Fredo) in the show.

Other notable stars who played Dyesebel were Edna Luna, Vilma Santos, Alice Dixson, Charlene Gonzalez and, most recently, Marian Rivera. “I’ve watched Vilma, Alice, Charlene and Marian’s versions. They are all sexy and put their own flavor to the character,” Anne noted. “It’s an honor to be mentioned in the same breath as these women.”

Anne said that she’d do everything in her capacity to give a good portrayal—well, except undergo plastic surgery.

“I don’t think I can do that… It will be noticeable because of all my photos out there,” Anne replied when asked if she was willing to have certain parts of her body enhanced to be “the sexiest Dyesebel ever.”

Anne had to field a few queries, too, that made her uneasy: “Will there be slapping scenes?” “Will you still do juice cleanse?” “Do you still drink alcohol?” Despite the occasional bouts of awkwardness, Anne often managed to flash that famous trademark smile.