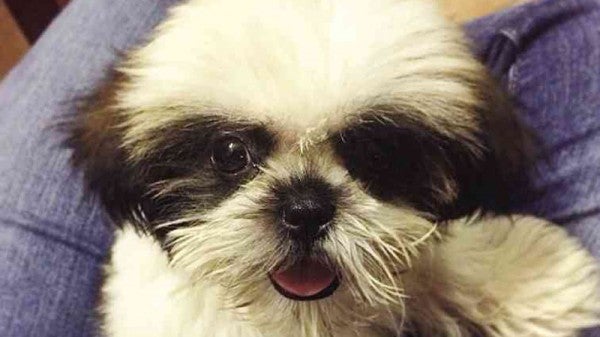 THIS is Lily, our three-month-old Shih Tzu. Facebook photo

As many of you know, we have a puppy. She is a Shih Tzu and we call her Lily. Her birthday is Oct. 7 (which makes her a Libra, like my brother) and she is adorable. When we first met her, she was cuddling with her two sisters, all incredibly cute, curious little creatures. I was first drawn to the runt of the litter, just because she was so tiny, but in the end, Lily won out because she was the most bibo of the three. Thanks to our friend Steffi del Rosario-Inocentes for the find! We will always be grateful.

Lily is now officially three months old. Adjusting to life with her has been interesting.

Living with a new puppy is akin to having a toddler, particularly in the “bodily functions” department. When she first came to live with us, Lily decided the entire kitchen floor was her bathroom, with all of us—the helpers included—chasing after her with a paper towel to clean up the soils and messes she’d leave in her wake. At times it was fine; at other times, it was frustrating. We have been leaving pee pee pads and newspapers in attempts to house train her… I’ll let you know if we ever gain success in that department.

Lily’s first night at home was a test of patience—a test I last remember taking when Nicole was a newborn herself, crying the entire night (the poor baby had a gas bubble that didn’t let her sleep until it passed). Lily was almost the same. Thankfully, one of us in my family is nocturnal (yours truly), so it wasn’t too terrible. Yes, she piddled and pooped that first night in her little sleeping quarters. The following day, we got her a proper crate, and she’s been wonderful in it. Today, I am proud to say that she keeps that little room of hers clean and dry, and lets us know when she needs to use the great outdoors to do her business.

One night, I was giving Nicole a bath when we heard Lily in her crate screaming bloody murder. At first we ignored her, thinking it was just her way of telling us she wanted to get out (numerous articles on the Internet advised not removing her from her crate when barking or crying, as it would train her into committing bad behavior). We let it pass, finishing Nic’s bathroom routine first. However, as it did not cease or decrease in intensity, Nic and I decided Lily needed to be brought downstairs.

Without fuss or much ceremony, I took her outside, staying completely silent. Sure enough, she needed to use the “toilet.” Once she was finished, I took her inside, and placed her back in her crate. Within five minutes, she lay down on her special pillow and fell asleep. Ah, what a relief it must’ve been.

Her first days had her sleeping… a lot… wherever and whenever she could: on the floor next to Rob’s USC slippers… on my lap… in her pen… in her carrier. She even fell asleep on the car ride to my mother’s house for Christmas. I’ve taken quite a few sleepy pictures of her, now proudly displayed on Instagram.

And like every toddler, she’s teething. She nibbles and nips at our fingers (which we try to discourage, because those canines are ever so sharp)… at our toes… at the cuffs of my trousers… on the dead leaves in our front yard. We’ve given her a few chew toys to get her gums to feel better, and offer that always as an option when she starts to get gigil with our digits.

Needless to say, we have all fallen in love with our little Lily. She’s incredibly adorable, loves being petted and hugged and fussed over and played with. When we first got her, the fur around her nose was covering her eyes, but once trimmed, we saw black rings that made her look like Bandit (from the “Jonny Quest” cartoons), or a raccoon or a panda. She also has unusually long eyelashes at the outer corners of her eyes. She has an abundance of tricolored hair (yes, hair, not fur). She thankfully doesn’t shed, but we do have to brush her every day to keep that luxurious coat from matting.

But more than the fluffy, cute, rambunctious, pouncing, ball of fur that Lily is right now, she is a companion, a true part of the Chien family. She takes out the stresses from a bad day, she brings us happiness with one wag of her tail whenever any of us comes home, and gives us many kisses and hugs when she’s in our arms.

Thank you, Lily. We only hope to care for you in the manner you deserve for as long as you are with us.

Tomorrow, Jan. 10, is our 10th wedding anniversary! To Rob, my partner in crime, in life and in love, I thank God every day for you. Here’s to at least 10 more of these! Love you, Hon!