Jessica Sanchez proud to be Filipino and happy to help 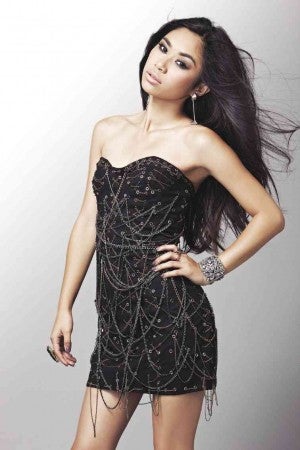 “AI” RUNNER-UP had three days to learn “Lupang Hinirang.” She asked her Filipino grandmother to help with the difficult lines and words. “It was hard, stressful.”

The first time she visited the country late last year, American singer Jessica Sanchez, though very charming, was also rather reserved—more so when facing the press. And despite her being of Filipino and Mexican descent, the “American Idol” runner-up admitted that she didn’t know much about the Philippines; that her Tagalog was limited.

While she still wouldn’t be giving interviews in the vernacular any time soon, the Jessica we met recently in an intimate group interview was more talkative and self-assured. Also, having sung the Philippine National Anthem at the Manny Pacquiao-Brandon Rios bout in November, and having visited more places in the country outside of Manila, Jessica said she had become more in touch with her Filipino roots.

“I felt like I was really from the Philippines … like, ‘Oh yeah, I’m a Filipino,” said Jessica, who was asked by Pacquiao himself—through Twitter—to render the anthem. “It was crazy, but I’m honored.”

The devastation wrought by Supertyphoon “Yolanda” in central Visayas, Jessica admitted, put immense pressure on her to sing “Lupang Hinirang” well. “I probably had three days to learn the song and it was hard. I know how you are so particular about singing it the right way, and so it was stressing me out,” she related, giggling.

Luckily for the 18-year-old, she had a Filipino grandmother to walk her through the trickier parts and words. In the end she did sing it beautifully—even better, observers said, than some homegrown talents did in the past. “I hope I made you proud,” Jessica said. “I wanted to show that I’m here for you.”

Does she see herself recording an all-Tagalog album? “I would love to. I love singing in different languages, though I don’t know what the song’s about,” said Jessica, adding, however, that she had to improve her grasp of the language first.

Jessica went to General Santos City in South Cotabato and Lipa City in Batangas for the Starkey Hearing Foundation—a group that gives hearing aids to people who need them.

“I just had to say hello, and they would start bawling because it’s the very first time they had heard [anything]. I didn’t even have to sing,” Jessica said. “It was an amazing gift to give and I’m so glad I did it here first.”

Out of her shell

Apart from learning more about the country, Jessica also felt she had matured in the past year. Slowly but surely, She is breaking out of her shell, and showing more personality. The teen singer recalled that, back in middle school, she was so shy, she couldn’t even hug the boy she was dating.

“I’ve opened up a lot,” she said. “Now I can have full conversations with people and talk about more things. I want to show who I am; that I have a personality, that I’m not boring.”

That doesn’t mean she’s ready to go down the Rihanna or Miley Cyrus route in terms of style or fashion. “I can’t see myself half-naked on the screen,” Jessica quipped, drawing laughter. She doesn’t have a boyfriend right now, either, added Jessica, who was previously linked to her fellow “Idol” alum DeAndre Brackensick.

“I’m single and open to dating and stuff—once I find the right person,” she said. “I’m now focused on family and career. I’m having fun—I’m 18!”

She intends to channel this newfound confidence to her music. Jessica recently released her debut album, “Me, You and The Music” (distributed locally by MCA Music Philippines), recorded on and off during the “Idol” concert tour. She described its sound as “urban and tomboyish, but still very feminine.”

She continued: “I worked hard on it, and I can say that this is the sound I was going for. If I had to compare the sound to someone else’s, it would have to be Rihanna or Beyonce. I love the whole diva, women empowerment thing.”

Meanwhile, to help “Yolanda” survivors, she has released the inspirational ballad, “Lead Me Home,” which is part of two fundraising compilation albums—“Heartbeat of Home” and “Songs for the Philippines.” The single can be downloaded from iTunes and SPINNR.

“All the proceeds will go to the Red Cross,” Jessica said. “I’m glad to help my people in any way I can. I was devastated by this tragedy.”

From “Idol,” she said, she learned that a career in the music industry is not a walk in the park. “It’s a lot of work, but this is what I love to do. And no matter how hard it is, I’m going to keep doing this,” Jessica asserted.

Thankfully, she can always turn to her family for support. One of the Filipino traits she’s proud to have assimilated is being family-oriented “I’m 18 and can travel by myself, but I choose to have my mother with me. I love being with my family,” Jessica said.