He hopes JT will interpret his song for typhoon victims 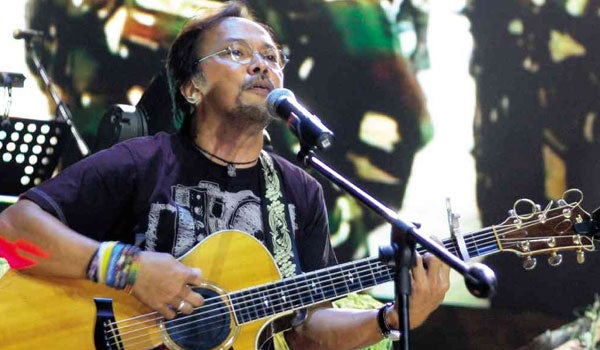 NOEL Cabangon says US icon can draw big support for the cause. RICHARD REYES

Singer-songwriter Noel Cabangon is a very busy man these days.

Not only does he have to find time for meetings concerning his many organizations, such as the Filipino Society of Composers, Authors and Publishers, of which he is president; and the Organisasyon ng Pilipinong Mang-aawit and Dakila-Philippine Collective for Modern Heroism, where he is vice president.

He also has to lend his talent to the flurry of fundraising activities organized by various groups to raise much-needed funds for the survivors of Supertyphoon “Yolanda.”

On Nov. 26, he took part in “Bangon Estehanon,” an event held at Bamboo Grande on Tomas Morato in Quezon City, to raise funds for the Diocese of Borongan, which will then help the southern towns of Eastern Samar such as Guiuan, Lawaan and Hernani—places practically flattened by Yolanda.

Then on Nov. 30, he participated in “Bayanihan Republic,” a whole-day festival at the Quezon Memorial Circle fountain area, again for Yolanda survivors.

But this doesn’t seem enough. Cabangon recently wrote and recorded a new song, “After the Deluge,” which he submitted to the website of James Taylor, an American folk rock icon.

“I sent him a message to give him an idea about the song that I wrote. My goal is to have Mr. Taylor record it and, if he agrees, donate all the proceeds to the rebuilding of the lives of those who survived the [supertyphoon],” Cabangon tells the Inquirer.

“I thought he could be a big help to us and draw more support,” says Cabangon. “James Taylor has a big heart. He has been widely recognized for his humanitarian activities.”

Cabangon considers himself one of Taylor’s biggest fans in the Philippines and the singer-songwriter’s songs form a huge part of Cabangon’s repertoire, with “Secret O’ Life” among his favorites. Clearly, if there is one artist he would love to interpret his composition, it is Taylor.

“James Taylor has been a great influence on me as a musician and a songwriter,” says Cabangon, himself an award-winning singer-songwriter.

But the creative mind behind such songs as “Ako’y Isang Mabuting Pilipino” and “Panaginip” had to muster the courage, having James Taylor in mind.

Cabangon concedes that Taylor is probably deluged with similar requests from all over the world. But then, he says, smiling, one can dream. “This is really a long shot. But you’ll never know; he might consider. I am keeping my fingers crossed.”