Erik Santos shows his fun side 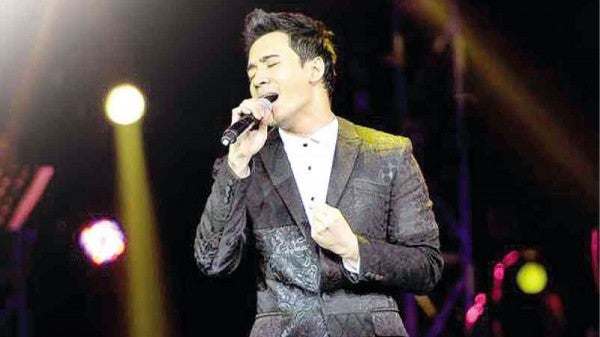 SANTOS’ belting was unfaltering and strong, his vibrato tight and even. Photo by Mike Sun

For his recent 10th anniversary concert, “inTENse,” at the Philippine International Convention Center’s Plenary Hall, Erik Santos tried something he wouldn’t normally do—dance. As he moved, if awkwardly, to disco tunes and such novelty songs as “Macarena” and “Whoops Kirri,” it was clear that Erik was enjoying himself, soaking in the moment.

After a performance of Ne-Yo’s “Let Me Love You” and Usher’s “Scream,” Erik told his well-heeled audience, in Filipino, “That simple dance took me half a month to perfect!”

It was refreshing to watch Erik do those upbeat numbers, but it was still those powerful, slow-burning ballads that left the crowd clamoring for more. The 31-year-old artist was especially impressive in a string of classic Filipino love songs used as themes in ABS-CBN teleseryes.

The OPM classics “Maging Sino Ka Man,” “Iisa Pa Lamang,” “May Bukas Pa” and “Muling Buksan ang Puso” wonderfully showcased Erik’s deep baritone. His belting was unfaltering and strong, his vibrato tight and even. He confidently dredged up the low notes and aced the high ones. Solid and memorable was his rendition of a “Les Misérables” medley, which included “Do You Hear the People Sing?,” “I Dreamed a Dream” and “Empty Chairs at Empty Tables.”

In what turned out to be one of the show’s best-applauded portions, Angeline Quinto and Yeng Constantino joined Erik onstage for a dramatic and forceful mashup of Meatloaf’s torch hits “It’s All Coming Back to Me Now” and “I’d Do Anything for Love.”

Just when the crowd thought Erik had run out of surprises, he came out and sang a mellow, stripped-down version of Britney Spears’ “Oops…I Did It Again.” Other standout covers were Nicki Minaj’s “Fly,” Christina Perri’s “A Thousand Years,” R. Kelly’s “I Believe I Can Fly” and several “American Idol” hits.

Special guest Rufa Mae Quinto, Erik’s ex-girlfriend, made a surprise appearance and had the fans in stitches as she poked fun at their failed relationship. Some of Erik’s closest friends in the biz—like Regine Velasquez, Pops Fernandez, Frenchie Dy, Ai-Ai de las Alas and Piolo Pascual—likewise dropped by.

They brought star power, no doubt, but they were given too much time on stage.

Fittingly, Erik, champion of the singing contest “Star in a Million,” brought the show to conclusion with the song that started it all: “This Is the Moment.” With the all-male choir Koro Ilustrado, Erik delivered the final note exactly the way he did it in the talent search finale—arms outstretched and looking up the sky.

Read Next
1st Indie Bravo! Film Festival: A Philippine tour via cinema
EDITORS' PICK
Tired of your Wi-Fi signal problems at home? Here’s a solution!
POVA x Mobile Legends Bang Bang: A partnership that’s built to win
Infants bundled off; no one hurt in PGH fire
OPINION: Mischief Reef – where it all started
Must-know scams to avoid when buying cars
Fire-damaged PGH calls for donations
MOST READ
Leonen impeachment case moves forward in House
Hot, humid weather for PH on Monday — Pagasa
Mischief Reef – where it all started
Woman believed to be dead wakes up minutes before her cremation
Don't miss out on the latest news and information.