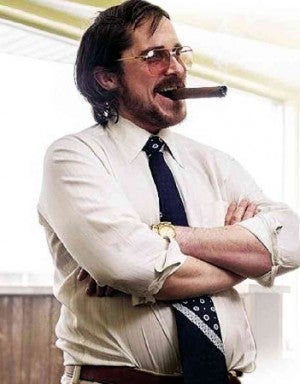 BALE as Irving in “American Hustle”

LOS ANGELES—The man who has gone from portraying Jesus to Moses, from being the “American Psycho” to starring in “American Hustle,” was in a good mood. “I am just half-crazed because I am so jet-lagged, I don’t even know what I am saying,” said Christian Bale, who  had just flown into LA from Spain, where he is playing Moses on the set of Ridley Scott’s “Exodus.”

“I got the weekend free,” he explained. “I have to be back on the set on Tuesday. I am endlessly amazed that people keep hiring me—so that is very nice. People are going to be extremely bored of me because I have been working for a couple of years straight. So I think it’s time for me to step away a little bit.”

Bored will be the last thing moviegoers feel when they see Christian in David O. Russell’s “American Hustle” and Scott Cooper’s “Out of the Furnace.” The man who lost many pounds for “The Machinist” and “The Fighter” gained around 50 pounds to play Irving Rosenfeld, a character based on Melvin Weinberg—the real-life con man in David’s latest opus.

“American Hustle” is the talented filmmaker’s take on the Abscam scandal, the controversial federal corruption investigation in the late 1970s. “Out of the Furnace,” on the other hand, is Scott’s riveting drama about Russell Baze (Christian), a blue-collar worker trying to save his brother, Rodney Baze Jr. (Casey Affleck), a troubled Iraq war vet.

“[‘American Hustle’] is a radically different film from this one (‘Out of…’),” Christian said. Aside from him, “American Hustle’s” brilliant cast includes Bradley Cooper, Amy Adams, Jennifer Lawrence, Jeremy Renner, Louis C.K. and Robert De Niro in a cameo.

“David sent me a script, which was a historical drama,” Christian said. “Then he went away and just threw the script out of the door completely. He came in with all the moments in between those beats, as per David’s style. ‘It’s all about the emotional truth,’ as he said to me one time.”

To get to that emotional candor, they improvised, sometimes drastically. Christian cited an example: “We were talking and radically changing a scene one day. The AD was saying, ‘Guys, we’ve got to film.’ We were like, ‘OK, let’s go improvise a whole lot but let’s get the basics of what you are looking for.’ I said to David, ‘You realize that this is going to change the plot greatly down track.’ David went, ‘Christian, I hate plots. I am all about character, that’s it.’ So that’s what it’s all about with David’s films. He is all about the characters. It makes for a really nice, vibrant look.” 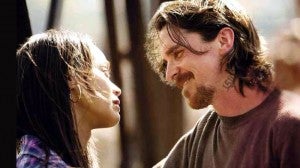 WITH Zoe Saldana in “Out of the Furnace.” Bale plays a blue-collar worker out to save his brother.

He revealed, “David and I butt heads at times, absolutely, but we enjoy that because it’s about honesty. There’s no sulking allowed. We bounce straight back from it. They are the best of times and there are other times when people are going (when they butt heads), ‘Clear the set!’ But it makes for a real vibrancy with the filming.”

The actor said of his Irving character, a paunchy man with a ghastly comb-over: “It is a hell of a character. It’s obviously a very fictionalized version based on Abscam and Mel Weinberg. I met with Mel. He was fascinating. But then it became David’s personal piece and our own interpretations on it. Yeah, it’s a good piece.”

On his Russell role in “Out of…,” Christian, who grew up in England, Portugal and the United States, said, “Russell has desperately been doing the right thing his entire life. He has adopted this stoicism. He’s the archetypal modern character. I am fascinated with characters who stay in the same places just because, for me, it’s such an alien thing. Because of the circumstances in my life, I have moved around since I was tiny so I don’t feel rooted to any one particular place. I am very fascinated with people who do (stay in one place).”

Christian added about his character, yet one more impressive addition to his list of memorable screen performances. “He has made the right choices but he feels like he’s eating s**t nonstop. Ultimately, when he feels like he’s got nothing to lose, the impulses that he suppressed and restrained throughout his life, start to come out—for completely understandable reasons, to me. I can see myself in those positions. I don’t blame him.”

Life hasn’t been kind to Russell then. Does Christian feel that life in general is fair or unfair? “It depends what day you catch anybody on,” he replied. “There are moments when you simply have absolute joy. You can’t believe the gift that you have been given. There are other days where you just can’t believe how awful everything is.”

On costar Casey’s brother taking over the Batman role in Zack Snyder’s “Batman vs. Superman,” Christian commented, “Ben (Affleck) is a very accomplished actor and director. I am sure he will do a stellar job. There’s a reason that he was chosen for it.”

On what advice he would give Ben, who now has to wear the Batsuit, cowl, cape and all, Christian cracked, “[Make sure you are] able to piss by yourself. That’s my advice. And also to be able to turn your head. Beyond that, I am in no position to give anybody advice.”

Christian as Moses should be another interesting turn for the actor. He said that taking the roles of Jesus in the 1999 TV movie “Mary, Mother of Jesus” and Moses happened in “very different circumstances. [The] Jesus [role] came after I had finished playing Patrick Bateman in ‘American Psycho’ and my house was getting repossessed.” He quipped, “Jesus came to me and said, ‘If you play this role, then you can save your house.’ So I did. Now, I am in different circumstances with Ridley.”

Of playing Moses, he said, “It’s a fascinating story and a fascinating individual. Did he exist [or] not? The factual truths are as important to me as the emotional truths. It’s a very interesting piece to be making with a studio because the Bible isn’t for kids at all. So you have to find this balance of where you go. How can you tell your story in a way that’s absolutely truthful? It’s a tricky thing. I like working with Ridley so much.”

He relished the move from sound stages in the United Kingdom to locations in Spain. “I prefer it so much more when we are on location. Studios, sound stages—I find it very tricky working in those environments. But once we get to locations, that’s where I feel at home.”

He celebrates a milestone in January. Does the former child actor think about turning 40 at all?

“No, but the fact that I had this accident where I smashed up my wrist and shoulder…” he answered. “This is all metal and everything now. I suddenly got a bloody herniated disc from stuff. I just like to go too fast on a motorcycle. Sometimes that goes wrong, doesn’t it? I am suddenly feeling all those ailments. I get up and hobble in the morning (laughs). But I ignore it. Actually, I am still the same dumbass I always was. I wish I had acquired some wisdom that I always imagined I would have at 40, but it seems to have eluded me so far.”

On whether his wife Sibi Blazic tries to change some of his habits, Christian remarked, “Oh yeah you have to, don’t you? I mean, some things you do willingly and for other things you are given an ultimatum. So you drink more whiskey.”