Papal award is a gratifying affirmation for Ryan Cayabyab 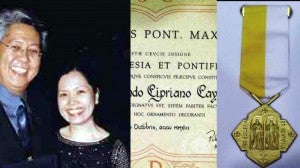 CAYABYAB. At 59 going 60, the best is yet to come for the country’s favorite Music Man, seen here with his wife, Emmy.

Ryan Cayabyab exceptional musicals, compositions and other performing arts, TV and f’silm involvements have been a major part of the local cultural scene for decades, winning for him multiple, well-deserved awards and accolades. In fact, a growing number of people wonder why the top National Artist honor is not yet one of them—but, that’s another story.

What’s specifically pertinent and exciting now is the “breaking” news that the acclaimed composer has just been honored by Pope Francis and the Vatican with the prized Pro Ecclesia et Pontifice award for his many contributions in the field of religious-themed compositions and sacred works!

As a colleague wryly but succinctly puts it, “Some men may sometimes prove to be inconstant in honoring those who deserve to be cited, but Heaven is much more reliable in that regard!”

Ryan recalls that he got the good news from Catholic Bishops’ Conference of the Philippines head, Archbishop Soc Villegas, who had nominated him for the prized honor, which only a few stalwart lay servants of the Church are privileged to receive.

After the nomination, Ryan’s “cause” had to go to the Vatican for rigorous research and verification, prompting another duly impressed colleague to puckishly wonder if the vetting process involved was akin to that used for  “sainthood”—! 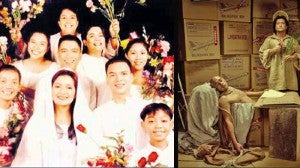 Ryan is quick to disabuse his colleagues of such pseudospeculative notions—but, he’s clearly happy about the unexpected honor—which, seen one way, trumps most other, more “worldly” awards still to come his way!

Since Ryan Cayabyab is best known for his many secular musical contributions, some people may wonder why he was singled out for the Vatican honor. However, the truth of the matter is that Ryan has been at least as productive in the field of sacred music as he’s been in the nonsecular or “profane” arena!

So, his new papal award honors an impressively voluminous and engaged body of work that has consistently striven to make music a balm for the soul, as well as for the hasty, heaving heart.

It all began, as Ryan recalls it, way back in 1975, with a small work in Pilipino, “Eclesiastes” for choir and piano, followed by his first large religious composition, “Misa” for unaccompanied choir, a Latin Mass that he did in 1983 as his graduation thesis at UP’s College of Music.

More than 30 titles later, Ryan’s list of religious compositions include other Masses, including a youth Mass for Pope John Paul II in 2005, psalms, prayers and biblical verses set to music, as well as a number of acclaimed stage musicals, like “Magnificat,” “Birhen ng Caysasay” and, most recently, “Lorenzo.”

It turns out that Archbishop Villegas, who nominated Cayabyab, knew extensively whereof he spoke, because he’s collaborated with the composer on a number of memorable works, providing the words for “I Believe in Peace,” “The Prophet,” “Asin ng Pamayanan,” “Live Christ, Share Christ,” and “Icthus” in “St. John’s Mass.” In addition, Ryan composed the Te Deum for the elevation of then Bishop Villegas as the Auxiliary Bishop of Manila in 2001.

A landmark achievement that stands out in Ryan’s already exceptional religious oeuvre is his “Misa 2000,” for the simple but most compelling reason that it won for him the Silver Prize in the very prestigious international arts tilt, the Onassis Cultural Competitions, in Greece in 2001. Competing with the best composers from all over the world, Cayabyab’s Mass for choir and orchestra triumphed in the rigorous contest, which some have dubbed as the “Olympics for the Arts.”

We were privileged to cover the awarding ceremonies for the Inquirer, and can proudly report that Ryan basked in the enthusiastic acclaim of his peers from all over the world, which he happily received—while retaining his usual, self-effacing persona.

In addition, our involvement as writer-director of some of Ryan’s religious musicals has given us an even keener understanding of why he is so “attuned” to the ethos of spiritual music, which only a few artists can fully vivify.

It all stems from his own simple and focused spirituality, evident in his basic goodness as a person, his readiness to be of service to others, and to use his gift for writing and performing music not just for entertainment, but to share profound insights into the human condition, the unique relationship between God and man, etc.

As Ryan himself sees it, his major influences in this regard were his sisters, Barbara and Melody, who were with Opus Dei for many years and lived a life of “work as prayer” so finely focused that it made a deep impression on him even in childhood, when he sometimes sang with the choir of the Chapel of the Holy Sacrifice at UP.

Later, his spiritual expressiveness in music was developed when he was asked to compose religious-themed pieces for the UP Concert Chorus and the Madrigal Singers, and he also did pieces for the Edsa Shrine Choir.

Now that he’s a papal awardee, how does Ryan see his further growth as a composer of religious-themed musical works? Is he writing a major composition or spiritual musical-drama to express his gratitude for the validation or even “vindication” that he’s just received “from above?”

The papal awardee laughs at the gauche shallowness of the “quid pro quo” query—but, he does seriously note that, now that he’s about to turn 60, he perceives a significant surge in his artistic maturation. He shares that he’s read that artists’ works in maturity tend to be more profound than their earlier efforts, so the great news is, the very best from Ryan Cayabyab—is yet to come!

(Cayabyab’s Pro Ecclesia et Pontifice honor will be awarded to him in a simple yet suitably significant ceremony at the Archbishop’s Palace on Dec. 21. Selected attendees will be treated to a concert of his excerpted religious compositions, to be performed by interpreters including the Madrigals, Jonathan Velasco and the Ateneo Chamber Singers.)