John Ford Coley: I love Filipinos; they laugh a lot 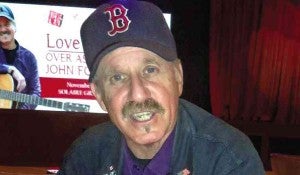 “I just truly love playing. I enjoy doing what I’m gifted to do,” singer-songwriter John Ford Coley told the Inquirer at the press event in Solaire Resort last Tuesday for his one-night show there, “Love Overload,” the day after.

“I’m not an audiophile,” Coley said, adding that he was never particular with the nuances of recording sessions, or even music formats. “I listen to any format… whatever’s convenient [as long as it’s] a greatly crafted song.”

Originally part of the Grammy-nominated American duo England Dan and John Ford Coley, the singer, 65, scored hits with  high school buddy Dan Seals in the 1970s—“Simone,” I’d Really Love to See You Tonight,” and “Sad to Belong,” among others. After eight albums, they disbanded in 1980. Seals passed away in 2009.

Oh, gosh. It should take you to places that you haven’t thought about… it should get you choked up. One is Dan Fogelberg’s “Leader of the Band,” [though] it’s not about a romance, but about love between father and son.

You’ve performed music in various genres. How do you pick them?

I’ve always been eclectic and have pretty much done what I enjoyed doing. Whatever happens to come out, it’s what God lets me do.

How is that spirituality informing your lyrics?

I don’t write spiritual music, per se; When people come to my concert, they don’t want to hear spiritual things or politics, although I’m very political. If you want to talk to me about those things, I’d be more than happy to, but not from the stage.

What have you observed about American music now?

The recording industry has changed dramatically. We have a new generation of artists with their own styles. I recognize that music changes and progresses. I enjoy Josh Groban and Little Big Town. I love Joni Mitchell, Shawn Colvin… Melody is a key ingredient.

How differently did artists behave all those years ago?

The older artists realize it’s not 1976 anymore and we can’t behave the way we used to. We’ve grown up a bit! Artists now have a lot more opportunities… but many don’t appreciate where they come from, and that’s sad. I grew up on the road, traveling with Bread, Three Dog Night, Elton John. Those who trashed hotel rooms, that wasn’t us. There were certain standards that we held for ourselves.

You recorded a live album here in 2009. What makes your bond with Filipinos different?

This might be my 20th visit since 2000. I love my relationship with the Filipino people for one major reason: they laugh and are appreciative. They have respect. They like love songs, things that speak to them. They’re very friendly and kind—I’ve experienced that on many different levels. The food ain’t bad either, I’ll tell you that!