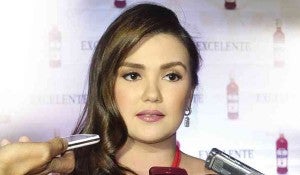 PANGANIBAN says website for fundraiser will be launched today.

Actress Angelica Panganiban, still reeling from a harrowing experience during the recent earthquake in the Visayas, sees nothing wrong with seeking psychiatric help to cope with trauma.

The actress, with the cast and crew of ABS-CBN’s gag show “Banana Split” were taping their anniversary episode in Bohol when the killer 7.2-magnitude quake struck on Oct. 15. She had since been a little jumpy, Angelica said.

“I get scared easily, especially when I’m traveling by car and the road gets too bumpy,” she told the Inquirer during her press launch as the latest endorser of Excelente Brandy Thursday last week.

“Luckily, I don’t need psychiatric help. But some staff members are still seeing their doctors.”

Angelica—who won best actress Saturday for “Alamat ni China Doll” in the Cinema One Plus—said the “Banana Split” team was busy organizing a fundraiser for the victims of supertyphoon “Yolanda.”

She said she personally wanted to help people in the Visayas pick up the pieces. The team is holding an online auction.

“We sat down and discussed it. We all agreed we were lucky to have been given a second chance after that quake. We all able to go home to our families,” she said.

“We’re constantly thinking of ways to help not just the typhoon victims but also those affected by the Bohol earthquake,” she said. They are launching the website for the auction today. “It will feature the items on sale and the beneficiaries.”

Angelica said her boyfriend, actor John Lloyd Cruz, wanted to go to Tacloban, which was severely damaged by Yolanda.  He was discouraged by the network bosses, she said. “It wasn’t safe at the time that he wanted to go. He’s cooking up a new plan now. It will be Christmas soon; and he wants people there to have a memorable one.”

She insisted that donors should closely  monitor the relief operations.

“I really hope the goods are given to people who need them most. Let’s be alert and vigilant. Other countries are extending help, and they are very organized. Let’s also watch our own efforts.”

She commented on fellow showbiz celebrities who have gone public about donating huge amounts for the twin tragedies.

“It’s really up to them, whether or not they want to publicize their good deeds. I don’t see anything wrong with that,” the actress pointed out.