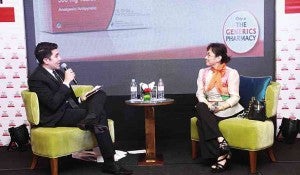 Ate Vi (Vilma Santos) was in high spirits at the belated birthday luncheon hosted for her by The Generics  Pharmacy at the Makati Shangri-La. The “Star for all Seasons” chose to partner once again with the country’s largest and affordable drugstore chain for a new multi-media campaign.

If we could only look as good as she does at her age, we would not mind being called a senior citizen—with junior looks!

“I’m still reluctant to sign my senior citizen’s card,” she chuckled. “I’m giving it time to sink in. Besides, I can still afford to pay even without discount,” she said, laughing.

The birthday girl had a candidly engaging interview with her son, Luis. She had to pause in the middle of their one-on-one to commend him. “Though I get to watch Luis host on TV, it’s rare that he interviews me,” she said. “I can hardly believe he’s all grown up and doing so well. Before, he just tagged along with me during shootings. Now he has made a name [for himself]. I’m one proud mama.”’

Ate Vi left no question unanswered. Even as she was swarmed by media, she had a knack for being attuned to each interviewer. That’s charisma a la Vilma!

On talk that Nora Aunor might be named National Artist: “She more than deserves it. She has made so many worthy contributions to the movie industry. I just hope the public won’t [make it an issue] between her and me. There are more important matters that our nation has to attend to.”

On the “Yolanda” tragedy, she expressed sorrow. “It’s heartbreaking! I wish I could go to the affected areas to cheer up the victims. But my worry is some people might misinterpret my good intentions. So I’m helping out in my own way. No need for fanfare. ”

She revealed that she and hubby Ralph Recto are stronger than ever: “We  keep each other on fire, always! We’ve been together for 27 years. We complement each other. I am strong where he is weak and [vice versa].”

On turning a year older, Ate Vi elaborated, “I welcome growing old.  I embrace the wisdom that comes with age. I have mellowed. Dati papatulan ko lahat ng intriga. Now I’ve learned to sift the significant from the insignificant.”

The survival stories of formerly battered women at The Women’s Crisis Center, featured on one of ABS-CBN’s “Mga Kwento ng Pasko” webisodes, truly serve as inspiration to many and encourage more women to fight for their rights.

Judy Ann Santos surprised them at the center to honor their  bravery and bonded with them. She  brought  a martial arts trainer to teach the women  basic self-defense moves.

This is just one of seven  heartwarming webisodes  on pasko.abs-cbn.com. Check out the kwentoseryes  of  Kim Chiu, Xian Lim, and other celebs. Time for some Christmush!