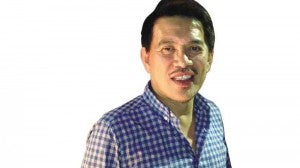 As a post-Halloween treat, Filipino filmmaker Brillante Ma. Mendoza will unveil his latest work, the first genre movie in his acclaimed career, “Sapi,” in local theaters.

Top-billed by Meryll Soriano, Baron Geisler and Dennis Trillo, “Sapi” focuses on a case of demonic possession as covered by fiercely competitive reporters from rival networks.

After premiering at the Toronto International Film Festival last September, “Sapi” was shown in various cinema events near and far: Busan in South Korea, Rio de Janeiro in Brazil and Sitges in Spain. Next stop for “Sapi” are fests in Taipei, Taiwan; Brisbane, Australia; Fukuoka, Japan, and Geneva, Switzerland.

Before making the rounds of the festival circuit, “Sapi” will return home, with a nationwide theatrical release on November 6.

Produced by Solar Entertainment and Mendoza’s own Centerstage Productions, “Sapi” could very well be, by his own admission, his “most commercial and accessible work.”

Still, Mendoza was able to inject his own brand of social commentary into the hugely popular horror genre.

Mendoza, who will receive the Chevalier dans l’Ordre des Arts et Lettres (Knight of the Order of Arts and Letters) from the French Ministry of Culture on November 14, explained that everyday instances of oppression and injustice, which often go unnoticed, could be more horrific than paranormal stories.

Here are excerpts from the Inquirer interview with Mendoza.

What was the reaction of foreign audiences to your first genre film?

The viewers told me that it was not the usual horror film that aimed only to scare people. They were able to understand what I wanted to say as a filmmaker.

What did you want to say in this film?

It’s my commentary on media.

The most flattering feedback came from media practitioners themselves. A Spanish broadcast journalist who interviewed me at the Sitges fest said that I was able to show the world of media.

They noticed that the media scene was practically the same in every part of the world. The issues and problems were the same. The competition was just as fierce. The race for scoops and controversial topics was just as intense.

How did you develop this concept?

Originally, we wanted to do a story on demonic possession. But as we did our research, as we interviewed people, we stumbled on an actual case similar to the one tackled in the film.

That was how the story evolved. It became a critique of media. I wanted to show how powerful media had become. So much so that media companies can twist the truth. They control what can be seen on television. People have no choice but to accept everything that the networks dish out. But people remain unaware of what’s really happening behind the scenes.

In our film, we subtly tried to show how truth can be manipulated.

For me, that is more frightening: When we start taking things for granted because we have become desensitized and jaded.

To think, this media critique is produced by Solar?

Solar has a news channel and we shot most scenes in its studio.

Was Solar head Wilson Tieng fine with the film’s criticism of media?

OK lang. He gave me full creative freedom. He was very happy with the result naman. Even before we started collaborating, he was well aware of the type of films that I do.

In any case, this film is not just an attack on local media. As a foreign viewer pointed out: The film’s story could happen anywhere. Even in other countries, there are network wars.

What are your other projects with Solar?

My company (Centerstage) also produced Jay Altarejos’ “Unfriend” for Solar. I will produce two more films that will be directed by other filmmakers for Solar.

What is the idea behind this collaboration?

Before Solar came in, I presented the same concept to a different production company. But Wilson acted on it more quickly.

Basically, I will come up with stories for movies that will be directed by other filmmakers. I thought of the idea for “Unfriend” and suggested Jay for the project because he is known abroad for his gay-themed dramas.

Will you mentor new filmmakers under Solar, too?

We will give young directors a break. Originally, the program was called “Brillante Ma. Mendoza Presents.” But I asked them to remove my name because I didn’t want it to look as if I was in charge of everything. I will still supervise and get producer credit, though.

I am currently in the middle of researching different story ideas. I have a project with Sen. Grace Poe, for her film tourism advocacy. My environmental projects with Sen. Loren Legarda and (ABS-CBN Foundation’s) Gina Lopez are ongoing, too.

I am also doing a documentary series for Solar News Channel called “Small Acts, Big Stories.” It’s about small acts of heroism made by ordinary people…that have the potential to inspire the world.

What were some of the inspiring stories you’ve encountered so far?

I’m supposed to make 10 docus. So far I’ve done four stories about a disabled performer, a fireman who saves pets, the street painters of Malate and a cuchero (driver of a calesa or horse-drawn carriage).