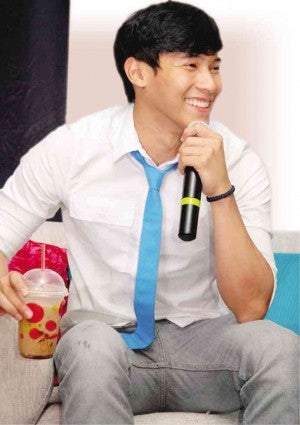 THE ACTOR got to reintroduce himself to his parents during a family trip.

“I’m not the type who records sex videos,” Dee declared.

“A scandal is something you’re not proud of,” the 24-year-old actor stressed. “I don’t remember doing something I eventually regretted.”

Dee said he did not feel “offended” at all by the controversy. “I actually felt excited. I’m now giving the person who spread that video on the Net the chance to prove I’m really in it.”

The 10-second recording of two males having sex started circulating two weeks ago.

Dee first addressed the issue on October 1, via his Twitter account, while on vacation with his family in China and Mongolia. He again discussed it during the recent press conference of his latest drama series “You’re My Home” on ABS-CBN.

“I accessed my Twitter account while in Mongolia and got to read all about it. Dinaan ko na lang sa sarcasm. I’m not scared of it, whatever it is. I’m not the kind of person who would do it anyway,” he said.

What concerned Dee was that “people would (have a low opinion) of me and actually believe that I’d be involved in a video scandal with another man.”

Dee said, “I’m not being boastful or conceited, but I really don’t know him (Castro). To the person affected by the controversy, pasensiya ka na.”

The Manila-based Castro has publicly admitted he is gay.

Dee said the fact that people continued to question his sexual orientation never bothered him. “These bashers have nothing new to say about me anymore. I’ve been in show biz for a long time now and kept hearing the same accusation. I don’t need to prove anything to them.”

The actor said he found people’s fascination with video scandals quite unsettling. “I can’t explain it. My guess is that (they just) want to see other people fail or ruined. It’s kind of sad.”

Dee said his family remained unaffected by the controversy. “I have my parents’ full trust. I sat down with them and said, ‘You don’t have to worry about the video because your son isn’t in it.’”

The actor surmised he was targeted “because I’m very visible on TV and in the movies. I’m the first person that comes to mind, so they link me to nasty issues like this.”

Dee has just returned from a week-long vacation with his parents and brother AJ. “I wanted to treat my mom and dad because I didn’t get to spend time with them last Christmas. Pambawi ko ito,” said Dee.

“We lived in a yurt [a circular dome made of animal skin and felt commonly used by pastoral people] in Mongolia. It didn’t have heater and it was so cold. (But) it was so fun to see my parents ride an ATV (all-terrain vehicle),” he said. “In China, we went to the Forbidden City and the Great Wall. It was a big adventure for us.”

If his schedule allows, Dee wants to go on more trips with his parents. “Now is the best time because they are still physically capable of long trips. As they get older, I know I will have to adjust to them,” he said. “I was so happy to have finally given my parents a treat. One of the best things that happened during our trip was they got to know me more.”

He added, “I feel sad that I’m always out working. During the trip, I was able to reintroduce myself to them. They saw how much I love eating, how loud I laugh, how mature I’ve become. It was refreshing to not think about work for a while.”

The actor considers “You’re My Home,” which will air during the first quarter of 2014, as “another blessing.” He said, “While God sometimes allows bad things to happen to people, He makes sure good things happen, too. Isa ito sa mga pambawi for all the intrigues I had to face these past years. I’m grateful for this gift.”