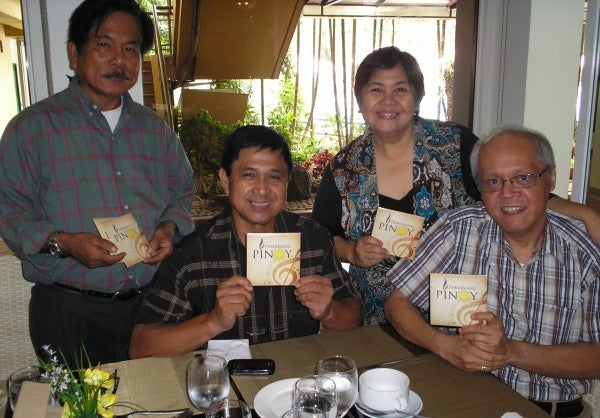 SAN JOSE, California—A “bayanihan-style” collaboration among rondalla musicians based overseas and in the Philippines produced a music CD by a uniquely Filipino musical string ensemble and was launched on October 24 at the Celebrity Club, Capitol Hills Drive, Diliman, Quezon City.

Its project architect, Pagyamanin Likas Musika (PLM), was originally meant for raising funds for the PLM, but because of the recent back-to-back natural calamities (typhoons and earthquake) in the Philippines, the united group of artists decided to share most of the proceeds with relief/rehabilitation operations of ABS-CBN Foundation’s Sagip Kapamilya.

The novel CD project is dedicated to of the memory of Bayani Mendoza de Leon (1942-2013), illustrious son of National Artist Felipe de Leon, and a distinguished composer, musician and master educator.

PLM is an informal not for profit organization based in San Jose, California, which has a unique Rondalla Instrument Lending (to own) Program where interested children of a nominated village or schools in the Philippines avail of the free use of rondalla instruments.

The Rondalla Instrument Lending Program has 50 community/school beneficiaries to date. This number includes an orphanage in Davao, foundations caring for street children in Quezon City, Pasay City and Bacoor City, an elementary school in Payatas and Southern Leyte, GK Villages in Imus, Cavite and Angat, Bulacan, indigenous tribes in Roxas, Palawan and a Philippine National School for the Blind in Pasay and a similar visually impaired School in Davao serving hundreds of underprivileged children.

The funds to defray the costs were initially solicited and raised by supporters of PLM. The initial hard-earned funds come from relatives, former schoolmates and friends and other back-breaking activities of the volunteers, like busking, yard sales, recycling for cash, and many others.  The program also has been assisted by the UP Alumni and Friends Rondalla. Led by Diane Valencia, the group had graciously donated $1,000.00 from the proceeds of their 20th Anniversary Concert.

Eight prolific groups and three gifted classical guitarist answered the challenge to participate and contribute their time and efforts to the CD project. The new CD entitled “Pamanang Pinoy” is consists of music from uniquely Philippine musical instruments – bandurria, guitar, laud, octavina and others.

The CD remastering and replication work was completed by the famed team of Venancio ‘Vehnee’ Saturno, Rose del Rosario and Doris Saturno who were introduced to the project by an avid PLM supporter, Cesar ‘Peewee’ Apostol, while the CD artwork was conceptualized and designed by the Anak TV Foundation husband and wife team of Bob and Edith del Rosario and Cultural Center of the Philippines Artist’s’ Raul Hababag.

The prime-mover of this collaboration, George Gange, San Jose International Airport commissioner and PLM founder/project director, said, “We want to stir up the passion among old and young generations alike so that Pinoys continually experience the joys of playing a rondalla instrument or listening to its lovable music while contributing much-needed albeit token funds for many of our kababayan victims of the recent unfortunate unwanted tragedies.”