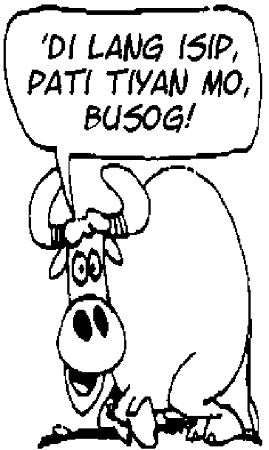 But a closer look revealed food booths with tarpaulin posters calling for the abolition of pork barrel. A photo booth offered props with messages such as “Pork Barrel ay PIGsa… dapat putukin (Pork barrel is a boil that needs to burst)!”

Live bands performed onstage while urging the people to continue the fight against pork barrel. A booth was also set up for donations to the victims of the Bohol earthquake.

A most interesting booth was one that collected receipts and showed users how much of their bill goes to tax, which may or may not land as pork barrel.

Hundreds of people flocked to this event, dubbed “Porktoberfest,” held on Friday night at Tomas Morato Extension in Quezon City not just to have a good time, Oktoberfest-style, but also to join mounting calls for the government to abolish discretionary funds, commonly known as pork barrel.

Organized by the same brains behind the Million People March, the self-styled Porktoberfest drew about 300 to 400 people—a paltry number compared to the hundreds of thousands of people who flocked to the original protest action at Manila’s Rizal Park—but organizers were satisfied anyway.

“We’re quite happy with it,” said lawyer Ram Ramos, one of the organizers, while holding a bottle of beer. “What we’re seeing is that the people who are coming here are not the usual people who go to rallies to voice out their opinion.”

Ramos said this was the crowd the event had intended to reach out to all along: the party people, yuppies and other members of the middle class who don’t join protest actions but are likely to be having a night out on Friday evening.

“We were thinking about how to engage the people who do not join rallies because we are not ralliers ourselves. And we thought of this: Why not create a street party on Friday night to loop them into our advocacy?” Ramos said.

The idea was conceived just earlier this month and the organizers quickly searched for concessionaires and acts willing to participate, which never came up short.

“And the timing was perfect because it’s October and it’s the month famous for Oktoberfest. We put a twist to it and named it Porktoberfest to get the message across,” Ramos added.

Everyone seemed in tune to the event’s twofold message: to abolish pork barrel and prosecute people who used the public funds wrongly.

Around a dozen bands performed short sets for the people who attended the event. Some of them, such as new band Parada, wore white shirts as a “symbol of purity” of intentions in using public money. Filipino-American hip hop duo Q-York, on the other hand, sought crowd participation, with chants such as, “When I say corrupt, you say stop.”

The more than a dozen food concessionaires who sold beer—in bottles, not free-flowing—and food to the partygoers also made their sentiments clear.

Kyrie’s Catering hanged a poster expressing support for the abolition of pork barrel in their stall at Porktoberfest. The owner, Dada Villanueva, is passionate about the issue.

“When the organizers asked me to join, I did not hesitate. We pay our taxes and the fact hurts that the government is so strict with us. We pay our taxes religiously but we get a hefty penalty when we miss out on payment of our monthly, quarterly and yearly tax dues,” Villanueva said.

“That fact hurt more when this pork barrel issue surfaced. I felt like I was robbed. I paid taxes religiously and I learn that my money ends up in the pockets of government officials.”

“For our company, our sign says everything. I also feel strongly about this pork barrel issue. We are all paying taxes but the misuse of funds is alarming because that’s what we, as good taxpayers, have strived hard to earn,” Dolot said.

The partygoers were also made aware of the fact that even if they don’t earn wages, they still pay value added tax (VAT) when they buy something.

“I was quite ambivalent about the whole issue until I learned about VAT, which we still pay for every purchase we make,” said a 20-year-old student, who asked not to be named for fear that his parents might find out what he was up to.

The highlight of the program was a noise barrage to urge the government to heed their call. Character actress Mae Paner, better known by her screen name “Juana Change,” caught up with the program after speaking at the Jesus Is Lord prayer rally at Quirino Grandstand earlier that night.

“This is truly different from the other ones we organized before. Here, there’s a genuine sense of fun while we are being reminded of what’s important,” she said.

But more than the noise barrage, the program’s kicker came at the end, where organizers revealed that the receipt collection booth has received 92 receipts for the night, with gross spending amounting to P63,658 and VAT collections totaling P6,820.

The receipts were stamped with “VAT under protest,” in line with the organizers’ message to the public that they pay taxes, even if they are not earning anything yet.

“The notion, especially with the unemployed, is that they don’t earn anything, so why should we be concerned? Well, that’s not the case. Whether you buy a cigarette or beer, you pay VAT,” Ramos said.