Determined to move on, Sunshine Cruz buys a new house

“There’s no turning back after this,” says the actress.

Cruz is scheduled to move to the three-story house in February. “I fell in love with it the first time I saw it,” she told the Inquirer. “Lakasan lang ng loob, especially since I only started working again less than a year ago. I kept praying because I didn’t really have enough money. Luckily, my mom lent me some money. I now have a house I can call my own. Imagine how it felt to be dependent on someone for 13 long years.”

Cruz quit show business when she married Montano in 2000. They have three daughters—Angelina Isabelle, 11; Samantha Angelene, 8; and Angel Francheska, 7.

“There’s no turning back after this. I’m so excited,” said Cruz, adding that she did not ask Montano’s permission for the purchase. “We don’t talk anymore. He promised earlier to help me buy a new house, but things turned bad between us. I can’t keep renewing my lease for the house in Quezon City—I had to do something. I’m just concerned now (because) I owe my mom so much money. I have to work doubly hard.”

Cruz said, although she had a choice, she felt more comfortable in the Parañaque house. “Even my daughters are excited. I’m definitely bringing them with me. I will not allow anyone to take them away from me.” Cruz said she planned to enroll her daughters, now studying in Quezon City, in a school closer to Parañaque.

The actress was one of the celebrity models during the recent unveiling of Petit Monde’s latest collections at the ongoing 2013 Philippine Fashion Week.

Cruz sat down with the Inquirer for an hour-long chat after the fashion show. Here are excerpts:

You admitted feeling threatened with all the beautiful women around your husband. Was that difficult for you?

It was difficult because I had to make sure I looked good and sexy all the time—and I was not doing it for myself but for someone else. Yes, I felt insecure because of all the pretty, sexy and young girls around my husband. It had been like that for 13 years.

How difficult was it to talk about the separation publicly?

It was hard because in all the interviews, I had to act like I was OK even though deep inside I was not. The sad truth is not all relationships have a happily-ever-after ending. I really wanted the marriage to last, but there were things that forced me to leave him. 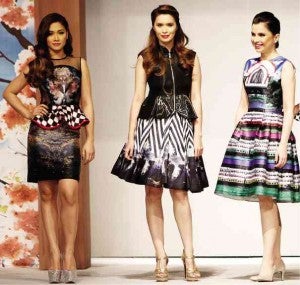 Is it true you now have a boyfriend?

I find this rumor really funny. This started when Cesar posted an old picture of ours on his Instagram account. People saw it and said, “You’re back together! We’re happy for you.” He responded, “No, this is an old picture of Sunshine. Apparently, she now has a new boyfriend. You can ask her.”

There’s this thing called digital karma. People asked, “Why are you doing this to your wife? It’s good [that she now has a boyfriend.] Natauhan na pala siya.” Although he deleted the post, many people already got a screen-grab. Asked by the media later, he said the Instagram account wasn’t his.

What’s wrong with your dating someone new?

I believe that God is trying to fix my life right now. Imagine how a woman with three kids, who decided to quit acting 13 years ago, was able to return to show biz so easily. There are many younger and more talented actors out there, but projects were offered to me. I consider this a blessing.

I believe that if I were to meet [a new guy], it would happen in God’s time. Cesar and I have been separated—although not legally yet—for almost a year so I see nothing wrong with dating again. (But) I’m not ready yet. I want to pay for the new house first and look for a new school for my daughters.

How did you make the girls understand and accept the separation?

They are smart children. When it happened, Cesar didn’t come home for four days. When he returned eventually, the girls didn’t want to see him. I told them, “Say hello to your dad. Keep loving him. He cares for you so much.” My girls are open-minded. They once told me, “We want you to be happy, too. You should have an inspiration, but you have to find someone who will love us as well.” 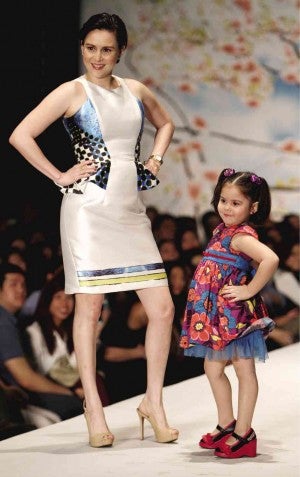 Do you let them see you cry?

Before I decided to break up with Cesar, I talked to them and we all cried. I told them, “You know that I did everything I could. I can’t stay with him anymore. What happened between your dad and I was wrong. I’m leaving him because I don’t want you to grow up thinking our relationship was normal. When you’re old enough to be with someone, find a person who will love and respect you—respect is really important.”

I took the job offers as a sign from God for me to move forward. Tinutulak na niya ako. My ex-husband has his weaknesses and maybe he also found me lacking in some aspects. I really tried to make it (marriage) work, but I eventually realized that the relationship was no longer worth keeping.

What is the most difficult thing to deal with now that you’re alone?

I feel lonely when my daughters aren’t with me. Cesar and I have decided that they would stay with him for three straight days and then, three days with me—we alternate on Sundays. I can’t wait for the court to decide finally who gets full custody. This temporary setup is not working well for the kids. They are having a hard time adjusting—this is so unfair to them.

What made you decide to go to court?

I had no choice because Cesar tried to hide the kids from me for many days. When I fetched them, they weren’t allowed out of the house to see me… I know Cesar did that to force me to return to him. He asked me to give him a month to prove that he had changed, but I said, friends na lang tayo. I wish him well. After all, he is the father of my daughters.