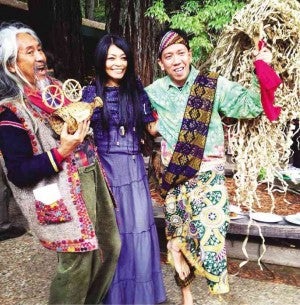 In a brave and risky move, the filmmaker formerly known as Auraeus Solito has decided to adopt his tribal name, Kanakan Balintagos.

“I am finally claiming the name … dreamt by my uncle Maman Rampang, a shaman who died recently,” he told the Inquirer. “My name means ‘Hunter of Truth’ in Palawanon.”

His uncle told him, Balintagos said, that “in his dream, he saw me in the middle of a sandbar holding a camera that turned into a blowgun. I became a kanakan … a hunter. Suddenly, great waves appeared from both sides of the sandbar, but I remained unharmed, untouched.”

Balintagos envisions his work as a filmmaker as a never-ending quest for beautiful truths and stories.

Now on its 14th year, the annual Toronto-based fest “celebrates the latest works of indigenous peoples in the forefront of innovation in film and media arts.”

Winning in ImagineNATIVE is like a sweet homecoming for Balintagos. “I’ve had a long history with ImagineNATIVE. It’s like coming home,” he said.

“I’ve won twice before in this fest, my favorite in the world,” he said. “It’s a great feeling … it’s always precious.”

In the citation for his latest work, the jury praised “Baybayin,” a Cinema One Originals 2012 entry that was supported by Hubo Productions, as a “beautiful poetic story that incorporates the use of language in every aspect of the story … it captures the depth of language and its central role in the richness of culture.”

Balintagos’ participation in this year’s ImagineNATIVE was made more memorable by his encounters with various Filipinos abroad.

“The award caps a long spiritual trip to North America,” he said.

The journey began last month at the Babaylan Conference, held in Sonoma County, California, and organized by the Babaylan Studies, headed by Leny Strobel.

“I was the keynote speaker at the conference, along with my mentor (filmmaker) Kidlat Tahimik, (singer) Grace Nono, (mumbaki or Ifugao shaman) Mamerto Tindongan and (traditional tattooist) Lane Wilcken,” he recalled.

At the premiere of “Baybayin” in Toronto, he met the people behind the organization Kapwa C. Tayo, an advocate for the rights of indigenous peoples from the Philippines.

“Filipinos in North America have been reawakened and are now aware of the importance of the Filipino way of life,” he said. “It is not true that Filipinos do not have an identity. We do. In fact, it’s myriad. If the colonial-minded Filipinos at home realize that Filipinos abroad are looking back … perhaps we can finally see ourselves for who we truly are.”