‘Genesis’ gets off to a scarifying start 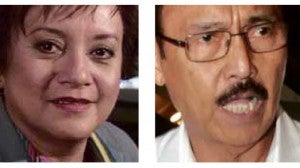 GUILLEN AND AREVALO. There are no “small” roles, only small actors.

The first telecast of GMA 7’s “sci-fi” doomsday drama series, “Genesis,” got off to a scarifying start last Oct. 14, with gigantic debris from an incompletely missile-shattered asteroid hitting Baguio City.

As bad luck would have it, the aerial “assault” was made even more tragic by the fact that the country’s very popular vice president, portrayed by Robert Arevalo, was attending the Panagbenga Festival at the time, in his official capacity, and ended up as a victim of the disaster.

On a more personal level, the disaster also affected the life of his trusted security chief, played by Dingdong Dantes, who lost beloved family members—and was separated from his fiancée (Rhian Ramos).

These personal losses and estrangements are expected to take up more of the new series’ attention in the coming weeks, but last Monday’s initial telecast scored the most points in terms of the special effects it whipped up to convincingly depict the ravages of the “attack” from outer space.

In general, the show’s attempts in this direction were quite proficient, especially the depiction of a bus full of passengers sinking into the shattered remnants of a road.

What was less than competently handled was the logic and believability of the events before the asteroid chunk crashed into northern Luzon: The threat of an approaching giant asteroid is of global import, and yet, when disaster did strike, many people didn’t even know about the imminent danger.

Yes, the failure of the mission to obliterate the asteroid by way of a missile strike was unexpected, but global and local media should still have been shown preparing everyone for the all-important defense mission and its possible consequences.

Despite these and other plotting considerations, the first telecast still succeeded in sustaining our attention, thanks to the felt performances turned in by cameo players like Arevalo and Laurice Guillen, as Dingdong’s mother. Their limited time onscreen didn’t prevent them from coming up with strong portrayals that gave the series’ early proceedings an empathetic hold on viewers.

Thus did these two veteran actors prove that there really are no “small” roles, only small actors—and that gifted thespians like them can do a lot with precious “little.”

Younger stars like Dingdong and Rhian would do well to study how their senior coactors are able to come up with felt and textured characterizations, despite being in only a few scenes.

We’re similarly heartened to see that other gifted players like Jackielou Blanco and Art Acuña are also in this new series, she was no less than the (scheming) president of the Philippines, and he as Dingdong’s possibly also “suspect” subaltern.

We hope that, this time around, the gifted actor will be given much more to do and explore than the piddling stuff he was made to shallowly enact in his previous teleserye outing (“Princess and I”).

With its cast of exceptional senior players, “Genesis” bears promise not just as a visually arresting “doomsday” or “apocalyptic” drama series, but also as a strongly empathetic depiction of how unexpected disasters can challenge and motivate at least some people to become heroes rather than just victims.

This may not be as spectacular as effects-driven sequences and visual flourishes, but it’s the real stuff that can inspire viewers to think of others—and thus empathetically emerge as heroes in their own lives!