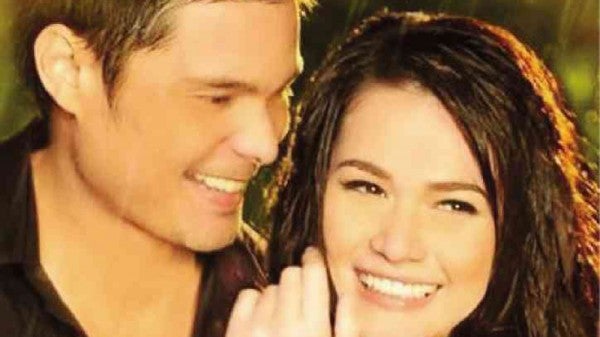 DANTES AND ALONZO. New screen partnership to root for.

Director Mae Czarina Cruz’s “She’s The One” resonates with moviegoers, because its oft-tackled themes are presented in situations viewers from different age groups can relate to. And while its I’m-secretly-in-love-with-my-best-friend premise may have been done many times in the past (remember the Sharon-Aga rom-com, “Kung Ako Na Lang Sana”?), the Bea Alonzo-Dingdong Dantes starrer breezily hits its narrative stride with clockwork precision—and with finely tuned characterizations, to boot:

Cat (Alonzo) has been carrying a torch for her best friend, carefree TV personality Wacky (Dantes), for 10 years. The situation wouldn’t have changed had the path of the 28-year-old laundry shop operator not crossed with that of 20-year-old David (Enrique Gil) on a rainy night.

After David sweeps Cat off her feet with public displays of affection and a courtship that “trendingly” plays out in social media, their budding May-September liaison triggers an emotional upheaval that shakes Wacky to his core and resurrects the circumstances surrounding the controversial kiss he shared with his doting best friend six years ago. With the younger guy making her feel well-loved and young again, Cat is finally ready to move on—or, is she?

Cruz steers her film’s zippily entertaining first act with a perfectly calibrated mix of easygoing enthusiasm and rom-com tease. To give the story its crowd-drawing, storybook finish, it launches into an awkwardly staged finale that has its beleaguered protagonists realizing the error of their ways.

But, you know that a production is losing steam when a scene that has one of its leads “unfriending” another is immediately followed by an epilogue that shows both characters chummily discussing a get-together that the other is unable to attend.

True, that’s a minor quibble, but it’s also a vivid reflection of the psychic disconnect and limitations that hinder a mainstream-weaned tale from truly going the distance—which is a shame, because “She’s The One” is a rollicking romp that’s as entertaining as it is affection-hooking. It also signals the birth of another screen partnership that moviegoers can root for.

It’s hard not to get drawn to Cat’s world when Alonzo, the finest actress of her generation, cuts through the surface and plunges deep inside her character’s emotional core—as she astutely demonstrates in a number of award-worthy scenes.

When Bea is hurting, viewers don’t just see it, they feel it. And, we’re pleased to see her film do well at the box office, even without perennial screen consort, John Lloyd Cruz, because, for the longest time, she has inexplicably been playing second fiddle to her multiawarded leading man.

Gil and Liza Soberano (as David’s best friend, Jillian) are also given moments to show off their dramatic promise, but the movie truly proves how experience trumps youthful enthusiasm. Dantes, who has ironically been winning accolades for his projects with Star Cinema, also acquits himself well in a role that is tailor-made for him.

The scenes aren’t as emotionally charged as those in “One More Try” and “Segunda Mano,” but Dong shows how those award-winning efforts have given him the courage to “stretch” and the confidence to expose his vulnerable side—especially in scenes where his character sees Cat and David kissing for the first time, and when it finally dawns on him that he may have finally lost the girl who’s made a promise to love him forever.