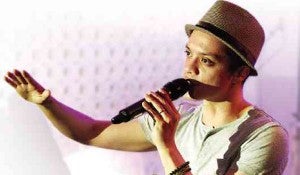 SOON after “The Voice PH” wrapped up, Bamboo hit the studio for his second solo record. photo by Rox Nebres

Though the reality singing competition “The Voice of the Philippines” had already ended, coach Bamboo Mañalac promised he would continue helping his team after the show.

“I’ll keep in touch with Myk (Perez), Paolo (Onesa), Isa (Fabregas), Lee (Grane Maranan)…everyone in my team, as I’ve personally connected with them. I’ve committed to recording demos for them, at least three songs,” Bamboo told the Inquirer during his recent launch as the endorser of Globe Tattoo Home Broadband.

Bamboo had contacted record labels for some of his team members such as Myk and Paolo. “They’re going to be signed; that’s a sure thing. I told them whether you get eliminated or not, you’ve already won,” he said.

Before the contest started in June, the 37-year-old rock artist said that his goal in accepting the role of coach was to find an “industry shaker.” He would like to believe that he had discovered good singers that could potentially make a dent in the scene given the right mentoring.

And though Myk didn’t end up winning, Bamboo was more than proud of his pupil’s fourth place finish.

“Myk was great right from the beginning of the contest…We didn’t want to go out easy, so we took chances,” he said.

Being a coach was a humbling experience for the former Rivermaya frontman, who said that it was gratifying to help aspiring artists realize their potential.

Bamboo has been performing professionally for more than 20 years now. Aside from the technical aspects of singing,  he made sure to broaden his team’s musical influences and knowledge in music history.

“Apart from Adele or Bruno Mars, they should also know the music of The Beatles, U2, Jimi Hendrix, Cream… They should all be students of the game and understand what this industry is about,” Bamboo explained.

He continued: “I gave everyone in my team books on John Lennon, Rolling Stone interviews…Somebody did the same thing for me as well, and it helped me a lot in figuring out what I really wanted to be.”

Fresh from the show’s grueling four-month run, Bamboo is back to the recording studio, for the followup to his first solo record titled “No Water, No Moon” (PolyEast Records).

Bamboo said that his coming album would have “more bounce and color.”

“I already have a couple of songs in the works; some of them are already half-done. So it’s all just a matter of sitting down and finishing them… I’m going to the United States next year to record,” related Bamboo.

He described the creative process, thus: “It’s like Alice in Wonderland, falling down that rabbit hole and finding yourself, finding that album.”

Snagging a deal with a foreign label would be great, Bamboo said, but it was not an obsession. “All I can do is write, record music. But if it happens, it happens,” he said.

He wouldn’t change his sound to land a deal abroad, though. “That’s compromising my music. When it comes to my album, I need to have full control. That’s important to me.”

What about acting in TV shows or movies? Despite having studied film in San Francisco, Bamboo quipped: “It’s a 99.5-percent no! Whenever I do something, I give 110 percent. I can’t go half in,” he said.