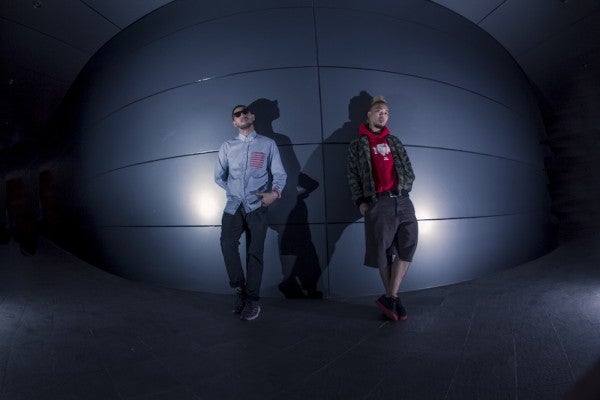 Motherbasss, pictured above from left to right: DJ Nix Damn P on turntables and Macky Brillantes on drums. Photo courtesy of Motherbasss.

It is high time the spotlight be focused also on our indie bands and acts. They form a deep well of diverse and amazing talents in the local scene. I will be showcasing once in a while an indie band or act that to my mind deserves a look and more attention. So below, let’s get to know Motherbasss:

INQ:  What is the origin of your team? Please give a brief history on how you came together to form your team.

Macky Brillantes:  We’ve known each other for a long time since we went to the same grade school, high school and college. We were never really close friends, although we occasionally see each other every once in a while in different clubs and bars after our college years. The most significant encounter came last year, when we again accidentally bumped into each other at a club in Makati. We talked about just jamming and merging the two forms together (Nix being in the club scene and myself being in the band scene) to create and offer something new.

INQ:  What are the team’s musical influences?

Macky Brillantes:  Having musical influences from foreign countries is a given. As much as possible we try to dig deep down to our local heroes and learn how they attacked the music using their own flavor and all those influences altogether.

INQ:  Can you describe your style of music to the unfamiliar?

Macky Brillantes:  We are a DJ and drummer combo so having a DJ enables us to play and sample music that you hear in clubs, mixing it with a live element which is the drums, giving more impact and twist. We play our sets for a nonstop 30 minutes or 1 hour, sometimes even an hour and a half. Each set is designed to fit the type of event or crowd we’re playing for. Sometimes it’s for listening, sometimes it’s for raging and dancing!

INQ:  What do you think of the current local scene?

INQ:  Any upcoming gigs you would like to promote?