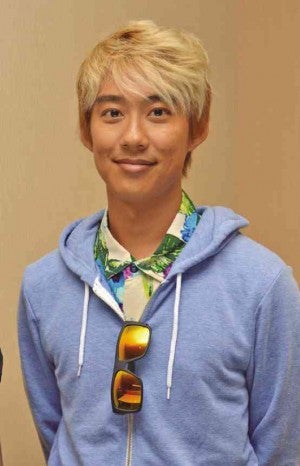 Japanese-American rock musician Joe Inoue was in town recently for the “Best of Anime 2013” convention at SMX Convention Center in Pasay City.

Inoue was not at all “anime-like,” Inquirer found during the presscon that preceded the event. He didn’t wear cosplay outfits,

either, or an anime wig.

He was warm, accommodating, attentive, and down-to-earth. His hair was dyed blond, but he wore a simple light-blue hoodie.

Inoue grew up in California—“near the beach,” he said, explaining his tan, which actually made him look like a Filipino.

In fact, he said he loved Filipino food, and that he enjoyed going around “local residential areas.”

“Sari-sari stores! I love them,” he said.

Saying Filipinos were “welcoming,” he recounted approaching a group of kids playing basketball near the border of Makati and Mandaluyong recently. “If you did that in another country, they would have run away,” he said. “But these kids were so nice.”

Asked if it was difficult for him to break into the anime music scene in Japan, Inoue said, “Not really. Though I was born and grew up in the United States, I always leaned toward my Japanese side. I really wanted to work in Japan one day. I learned to speak Japanese by reading comic books and watching anime.”

But he does not see himself as just an anime singer. “I listen to all kinds of music—rock, techno, electronic, even  death metal and jazz.”

If he had to peg himself, “It would be, simply, J-Pop. But there are so many different elements in my songs, so you could say I’m multigenre.”

What’s next for Inoue? “I’m doing this new thing, ‘Tenguboy.’ Under this new name, I’m going to do… crazier stuff that I couldn’t do as Joe Inoue.”