A bittersweet dance of life 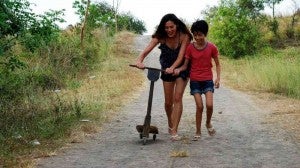 Sigrid Andrea P. Bernardo doesn’t shy away from stories that have the potential to provoke dialogue and, sometimes, debate—much like “Ang Huling Chacha ni Anita,” one of eight entries in the ongoing CineFilipino Film Festival.

From the start, Bernardo had a clear purpose: “I wanted to tell a story about women’s desires.” Specifically, “a woman’s desire to be independent, to love freely, to have a child or to be childless.”

“Chacha” focuses on the blossoming of a young girl who falls for an older woman with a troubled past.

“Anita was inspired by my wish to express queerness in its purest and most fundamental form: love,” she explained. “I wanted to tell this story through Anita’s young eyes. My goal is to make the viewers relate and remember the creative power and magic of their first loves.”

Bernardo has always been interested in gender and sexuality issues. The script for “Chacha” was written as early as eight years ago. “In 2005, I made my first short film ‘Babae,’” she recalled. “My original plan was to make a docu on women’s rights. But when it was selected for a film fest, I tried doing a narrative short combined with a docu.”

“It is part of my continuing exploration of sexuality, gender, religion, morality…in the complex, globalized culture of our country,” she noted.

She wants to take part in the ongoing conversation on women’s rights and gender sensitivity: “I believe that all of us, not only women, are free to make decisions about our bodies. I hope to contribute to the understanding of emotions…of being in love at an early age and determining one’s sexuality.”

In telling Anita’s story, she found a colorful backdrop in the fertility rite of Obando, Bulacan, where women dance cha-cha in the streets, to request or give thanks for miraculous pregnancies.

Coincidentally, the shoot can be summed up as a labor of love.

“The shoot went well,” she recounted. “I couldn’t say it was smooth-sailing, but we managed to put our worries behind us by singing and dancing on the set.”

“I only have one general rule on the set: For everyone to be happy and inspired during the shoot,” she said.

And “Chacha” pushed her to the limit.

“Directing has always been my passion,” she remarked. “But producing is a huge challenge for me. As this film’s producer-director, I needed to be disciplined, to be always mindful of budget constraints.”

“There were a lot of instances when I needed to rethink a whole scene because we didn’t have enough money,” she related. “But I looked at it as a way to hone my skills as a director.”

Her main job, she said, was to make each scene look beautiful on a shoestring budget.

Helping her achieve her goal was the cast, led by Angel Aquino as the object of young Anita’s affection.

“Angel is humble and treats her fellow actors with utmost respect. I am grateful that she trusted me in redefining her screen persona. In ‘Chacha,’ she broke away from her usual mainstream roles.”

The child actors (Teri Malvar as Anita and Solomon de Guzman and Lenlen Frial as her friends Goying and Carmen) were just as delightful. “Lenlen and Solomon had fun, but they were pros. Teri was a discovery. She bloomed during the shoot.”

Bernardo has high expectations for “Chacha.” “I hope it will teach people to respect each other’s choices. I hope it will teach us to believe in love, dreams and miracles.”
The CineFilipino fest is ongoing until September 24 at the Newport Cinemas of Resorts World Manila, Lucky Chinatown Mall and Gateway Cineplex.