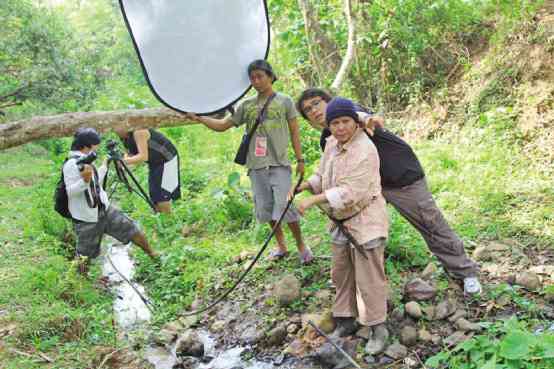 DIRECTOR Mes de Guzman (behind Nora Aunor) collaborates with a big star for the first time.

Internationally acclaimed filmmaker Mes de Guzman is known for films that are poetic in their simplicity—from 2005’s “Ang Daan Patungong Kalimugtong” to his latest works, the “Earth” trilogy.

De Guzman’s most ambitious undertaking yet is his latest movie, “Ang Kwento ni Mabuti,” one of eight entries in the ongoing CineFilipino Film Festival.

“The biggest challenge was having the Superstar in the lead role,” he admits.

“I shot ‘Mabuti’ with a bigger crew and a much bigger production budget compared to my previous indie films,” he relates. “But I did it the indie way still, bearing in mind that it is just like my past movies. That was how I survived the shoot.”

For “Mabuti,” De Guzman cast indie favorites Sue Prado, Arnold Reyes, Mara Lopez and the late Ama Quiambao as Aunor’s costars. It was certainly his first time to deal with fans who trooped to the set no matter how remote or inaccessible.

Lopez reports that a mob of Noranians descended on a shoot in an ukay-ukay market. “Entire families, some lugging infants, would hike across mountains to catch a glimpse of Nora,” De Guzman recounts, likening the shoot to a picnic. “We had fun, laughing and chatting between takes.” 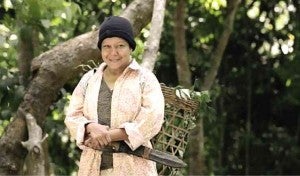 NORA Aunor had long wanted to act in another dialect and learned Ilocano for this film.

Aunor learned to speak Ilocano for the role, though De Guzman didn’t require it. “She said she had always wanted to act and speak in another dialect,” the director says.

A Bicolana, Aunor reportedly wanted to stay in Nueva Vizcaya, awed by the back-to-basics lifestyle led by De Guzman and his family. The filmmaker relocated there in 2009 and has since been documenting the unique landscape.

“We discovered a beautiful location in Aritao, a place literally surrounded by mountains,” he says. “Then, I found a lake on top of a mountain and instantly knew we had found the location for ‘Mabuti.’”

He first thought of this story seven years ago. “I once called ‘Mabuti’ a narrative in no hurry to be filmed,” he says. Writing non-stop—“a three-day marathon writing session”—he completed the script in time to beat the CineFilipino deadline. “I work well under pressure—stress makes me think faster. Then again, I knew the characters, the setting and the structure by heart.”

De Guzman is quick to point out that his film is not based on Genoveva Edroza-Matute’s short story of the same title. “I merely wanted to tell a story about honesty and righteousness,” he explains.

In the original concept paper, Mabuti was a man who travels to the city to seek a solution for his father’s illness. “Along the way, he meets different people—a politician, government employees, military men. For CineFilipino, I thought Mabuti should be a woman,” he says.

When Aunor signed up, De Guzman revised the script yet again three days before the shoot started. “Maybe the story inspired me to search for the real meaning of being a good person. Goodness is innate in Mabuti. She’s always on the side of what is right, in spite of the conflicts and challenges that she encounters on her journey.”

The CineFilipino Film Festival runs until Sept. 24 at the Newport Cinemas of Resorts World Manila, Lucky Chinatown Mall and Gateway Cineplex. It will have weekend screenings at the Shangri-La Plaza mall tomorrow and on Sunday. Apart from eight feature films, 10 short films will also be screened during the fest.