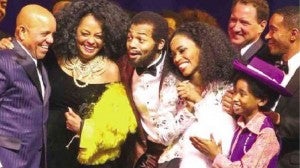 GORDY (left) and Ross, with the cast led by Dixon, LeKae and Luke. PHOTO FROM FT.COM

It took the Broadway rock musical, “Spider-Man: Turn Off the Dark,” more than 180 preview performances to iron out its many logistical and technical kinks—and turn initially scathing reviews into heaps of glowing praise.

On the other hand, the similarly buzzed-about “Motown,” the jukebox musical currently showing at the Lunt-Fontanne Theatre in New York, may not be as controversial, but it has its share of snooty detractors, who find its story too simplistic for the production’s formidable scope. Just the same, what the musical accomplishes is no mean feat—it’s a triumph of astute editing and exceptional musicality!

If “Mamma Mia!” weaves its tale around the discography of one hit-churning pop group (Abba), director Charles Randolph-Wright’s theatrical scorcher plays out the platinum-plated soundtrack of two generations

The musical begins before the telecast of the 1983 TV special, “Motown 25: Yesterday, Today, Forever,” commemorating the silver anniversary of the fabled recording company founded by Berry Gordy Jr. (portrayed by Brandon Victor Dixon) in Detroit, Michigan, in 1959.

A Who’s Who of Motown’s gifted alumni is scheduled to grace the show: The Temptations will perform in a singoff with The Four Tops, Marvin Gaye sings “What’s Going On?,” Diana Ross reunites with The Supremes, Linda Ronstadt collaborates with Smokey Robinson, and Michael Jackson will dance his first recorded moonwalk to the tune of “Billie Jean”! There’s one problem, however: Gordy has no intention of attending—because his wards have all left Motown and deserted him!

Where it all began

Then, the story jumps back to 1938 Detroit, where it all began—when Joe Louis’ heavyweight championship triumph against German boxer, Max Schmeling, inspired 9-year-old Berry to think of “things that make people happy.”

The narrative follows Gordy’s close ties with Robinson (Charl Brown) and Gaye (Bryan Terrell Clark), his romance with Diana Ross (Valisia LeKae)—as well as the rise of the Motown sound and the fall of Gordy’s recording empire.

The musical’s intimate moments are as revealing as they are moving: It shows that Diana Ross wasn’t as successful as hyped up when she decided to leave The Supremes to pursue a solo singing career!

Initially, Gordy had to pay a lot of people to watch Ross’ concerts and cheer on his trophy wife. So, it’s heartbreaking to see him torn to pieces when his ex-wife eventually discloses her intention to jump Motown’s sinking ship and transfer to RCA!

Through the two-hour-and-45-minute show, the audience is treated to an electrifying and briskly staged song-and-dance romp of Motown hits—around 67 of them!

—performed by Mary Wilson, Gladys Knight and the Pips, Martha and the Vandellas, Jackie Wilson, Lionel Ritchie and the Commodores, The Jackson 5, Rick James, and a young and cocky Stevie Wonder!

The lineup of songs include “Papa Was A Rolling Stone,” “I Can’t Help Myself,” “Dancing in the Street,” “My Guy,” “My Girl,” “Please, Mr. Postman,” “Stop! In the Name of Love,” “Signed, Sealed, Delivered I’m Yours,” “I Heard It Through the Grapevine,” “Super Freak,” “All Night Long,” “Who’s Loving You?,” “Mercy, Mercy Me,” “Money (That’s What I Want),” and a soaring rendition of “Ain’t No Mountain High Enough.”  —Only a tone-deaf curmudgeon and musical hermit could resist them!

But, it’s the young Michael Jackson (Raymond Luke Jr. and Jibreel Mawry), who whips the crowd into a raucous frenzy when he sings “I Want You Back,” “ABC,” “The Love You Save” and “I’ll Be There” (not in the 14-song soundtrack) with his brothers—and displays the charm that sets the singers apart from the Superstars!