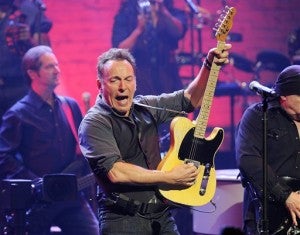 SANTIAGO—Bruce Springsteen has paid tribute to a Chilean folk singer who was tortured and murdered 40 years ago this week in the early days of Augusto Pinochet’s military dictatorship.

“If you are a politically inclined musician, Victor Jara continues to be a great expression of that,” Springsteen said in very good Spanish Thursday night at a packed concert in Santiago, his first in Chile.

“It is an honor to be here,” said Springsteen.

Springsteen, known for his left-leaning political activism and being a champion of the working class, recalled a concert he gave in 1988 in Mendoza in neighboring Argentina, when Pinochet was still in power.

The American musical idol said he met a lot of people with missing relatives in Chile and was shown photos of them.

“It is a moment that has stayed with me ever since,” Springsteen said.

As a tribute to Jara, Springsteen played one of his best known songs, called “Manifiesto,” one of the most emblematic of a social and cultural movement that arose in Chile in the 1960s and early 70s.

Jara was arrested, tortured and shot to death with 44 bullets in the first days of the dictatorship of Pinochet, who seized power Sept. 11, 1973.

Legal proceedings seeking to determine the exact circumstances of his killing and just who killed him remain open in the Chilean courts.

Pinochet stepped down in 1990, allowing a return to democracy, and died in 2006.

His regime is blamed for more than 3,000 deaths and 38,000 cases of people being arrested and tortured as the regime cracked down on anything that smacked of leftist dissent.