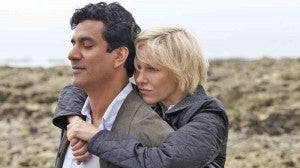 ANDREWS AND WATTS. Team up in anticipated drama.

LOS ANGELES—“Lost” actor Naveen Andrews, who plays Dr. Hasnat Khan, Princess Diana’s lover for two years, in “Diana,” said in a recent interview that he was not aware of that relationship until this film project came his way.

The movie, which stars Naomi Watts as the beloved late Princess of Wales, is based on Kate Snell’s 2001 book, “Diana: Her Last Love.” Adapted by British playwright Stephen Jeffreys and directed by Oliver Hirschbiegel, “Diana” concentrates on the relationship between Diana and the renowned Pakistani cardiologist which lasted for two years and ended before the former’s tragic death in 1997.

The surgeon was quoted in stories as saying that he and Diana talked about living in Pakistan, where he would open a heart hospital, while she would help in charitable institutions dedicated to women.

The London-born actor of Indian heritage said, “I have to say that, when I read the script, it reminded me of one of my favorite movies, the best love story on film, David Lean’s ‘Brief Encounter.’ I like the idea that this was a very pure story about two human beings. Obviously, with our film, one of them is world-famous, an icon, but I loved the intimacy and simplicity of the story about just two people.”

The thespian, memorable as Sayid Jarrah in the hit “Lost” TV series, explained that Kate Snell’s book helped him prepare for the role. “I also went to the Royal College of Surgeons in London to meet doctors who had actually worked with Hasnat and knew him personally.”

He did not meet Hasnat, now 54, who is a cardio-thoracic surgeon consultant at Basildon University Hospital in Essex. “The very nature of this piece, in doing a character who’s still living, and who is more than keen to maintain his privacy, who’s very dignified and honorable, I feel quite protective of him,” Naveen pointed out. Hasnat, who admitted that he has not seen “Diana,” was quoted in news stories as saying that the film is “completely wrong.”

“There’s something refreshing—I don’t want to say old-fashioned—about Hasnat that seems to come from a different era,” Naveen talked some more about the man who dated Diana between 1995 and 1997. “He doesn’t seem to be bothered by modern neurosis in the way that most of us are. I have to stress, with that background—it’s very masculine—his sense of control and order would have been deeply compromised. That is what makes the story wonderful, and that’s why I brought up ‘Brief Encounter.’ There are two people who have made this connection, but it’s impossible—it can’t work, and the audience knows it can’t work.”

On what he learned about Diana in his research for the role, Naveen replied, “She was extraordinary, vulnerable and loving. I hope that comes through in the film. She had this desperately vulnerable quality which, of course, is attractive. Naomi’s great gift as an actress is that vulnerability, which really does suit ‘Diana.’”

To physically prepare for the part, he had to gain weight. “I put 16 pounds on,” Naveen shared.

“I was in London, so you could have as many large English breakfasts as you could possibly manage—black pudding and those tarts with cream—it was good research! It doesn’t take very long to gain weight.”

Naveen is dad to two sons. He said that Jaisal, 21, goes to a university in Manchester, while Naveen Joshua, 7, goes to school in Santa Monica, California, where the actor lives.