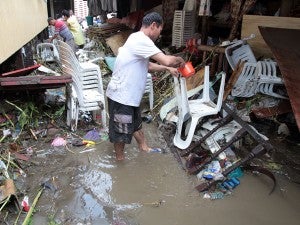 On the plus side, we were pleased to see that field reporters at a flooded area no longer made it a point to stand in the rain and wind, to “prove” to viewers how hard and selflessly they were working at such risk to their own safety and health, just to bring the latest reports to them!

This “emotional” and “sacrificial” style of coverage used to turn us off in the past—we found it weird and funny that, even as all other humans and pets were seeking shelter under a roof or waiting shed, those “courageous” and selfless field reporters were getting completely doused!

The fact that nobody was still doing that on-cam last month was a big improvement, because it showed that our TV news people were less prone to indulging in self-serving antics, and instead concentrated on bare-facts, no-emotional reportage—as all self-respecting reporters should.

Unfortunately, we did see one reporter doing a coverage while clad in boots and standing in only  ankle-deep water. Some habits die hard, indeed. —Well, at least the reporter wasn’t getting rained on and buffeted by gales while “bravely” making the report…!

Also an improvement was the familiarity that some field reporters had with updated storm-evaluating machines and procedures. Equipped with this new knowledge, they were of greater help to storm victims who needed detailed guidance and help.

On the other hand, we were ticked off by TV networks’ and some stars’ propensity for plugging their relief efforts. We know that this is a complicated issue, because they may just be wanting to set a good example so viewers can be motivated to be similarly generous. But, the confusion between selfless generosity and PR advantage can be all too real, so celebrities and volunteers should be very careful about their true motives not being misinterpreted—or found out.

By the way, celebrities should also be cautioned against posting well-meaning but too emotional tweets about their concern for disaster victims, because they could be seen to be shallow and self-serving. It’s a dodgy distinction to make, so celebrities should similarly dodge the risky, “heartfelt” declarations—!

Elsewhere on the tube, we note with concern the increasing use of celebrities as movie “reviewers” who urge viewers to catch the “excellent” new starrers of their friends and studio-mates. —Since when did stars and starlets become experts at evaluating the quality of other actors’ films?

Some of them can’t even come up with acceptable performances in their own flicks—so, they should desist from foisting their views on others. We trust that most viewers can see through this chummily subjective PR ploy, and not swallow it hook, line—and stinker!