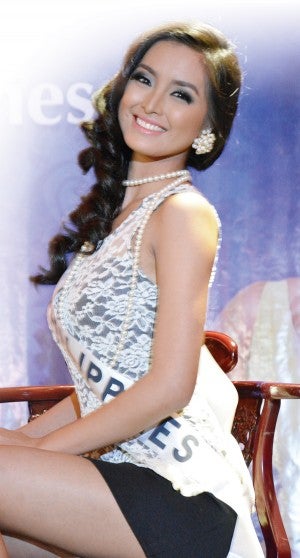 She came from a province frequently visited by typhoons, but she believes this has helped her become a beauty queen.

“Being in the path of typhoons has made the people of Isabela become always prepared and alert,” 2013 Miss Supranational Philippines Mutya Johanna Datul told Inquirer Entertainment during her recent send-off party at the Gloria Maris Banquet Hall of the Gateway Mall in Quezon City.

“That way of life has certainly helped me in my participation in pageants. Whenever I join contests, I’m ready for anything,” added the 21-year-old information technology student.

Mutya, who was proclaimed Best in Evening Gown and Miss Photogenic in the Binibining Pilipinas pageant last April, is currently in Belarus for the Miss Supranational pageant. She is competing against more than 90 international delegates in her quest to become the Philippines’ first winner in the Europe-based contest.

No Filipino representative has ever won in the five-year-old competition. The Philippines’ only placement has been Elaine Kay Mool’s third runner-up finish last year.

Mutya is the first winner of the Miss Supranational Philippines title. The Bb. Pilipinas Charities Inc. (BPCI) first sent a delegate only last year when it appointed Elaine, Bb. Pilipinas first runner-up. This year, it decided to add this new title in the pageant last April.

The country’s first three representatives to Miss Supranational were hand-picked by a different group.

Elaine said the international competition’s slogan was “Unite the world through beauty” which, she surmised, meant “using one’s physical beauty to gather people from different countries together in the name of unity.”

A Business Management student and former varsity cager of the National University, Elaine said the contest was looking for a “supermodel-type, confident and can stand for herself.”

Last year’s winner was Katsyariana Buraya from Belarus. The pageant was held in Poland, where it has been staged since its inception in 2009.

This year, a record number of 94 delegates are participating, including two with Filipino lineage—Norway’s Marie Molo Peter and Canada’s Suzette Hernandez.

Suzette was first runner-up in the 2010 Mutya ng Pilipinas pageant. She later tried her luck in the 2011 Bb. Pilipinas pageant but failed. She flew back to Canada, where her family has been based for a long time, and joined the 2012 Miss Canada Universe tilt, where she cracked the Top 12.

Mutya said she would make sure to be the first to greet both Marie and Suzette when they meet in Belarus. “We’re all Filipinos, and it’s a trait of ours to greet compatriots. We’re a loving race and we don’t forget our roots,” she explained.

This is Mutya’s first overseas trip; she has prayed for this since she was a child.

She also hopes to show others what a Filipino is like, “not just through words, but through actions. I will show them how disciplined, courteous, loving and God-fearing we Filipinos are.”

Apart from showcasing the Filipino spirit on the global stage, Mutya’s “sisters” in the Bb. Pilipinas are hopeful she will clinch the title for the country.

Shamcey Supsup, 2011 Miss Universe third runner-up, said: “You can say there’s something special about [Mutya]. She’s from humble beginnings and all of these are new to her. She should use this perspective to her advantage. She’s also very charming! I know she will give her best, like she always does. She will achieve her dream as long as she uses her innate charm. There’s no question about her stage presence, she’s already an expert.”

Ariella Arida, 2013 Miss Universe Philippines, offered Mutya the following advice: “Put God first in everything you do; pray first. Second, [do your best since] it’s all for the Philippines. Third, know what your heart dictates.”