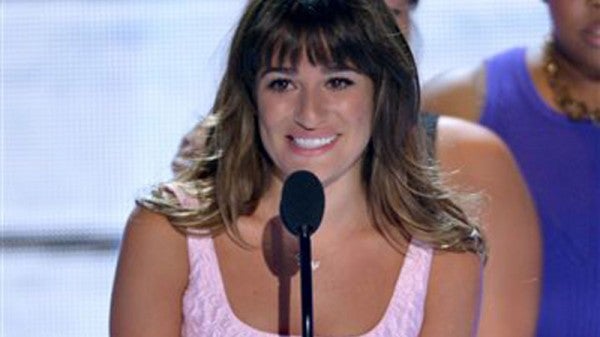 Actress Lea Michele speaks on stage at the Teen Choice Awards at the Gibson Amphitheater on Sunday, August 11, 2013, in Los Angeles. AP

Lea Michele made her first public appearance following the death of her co-star and real-life boyfriend Cory Monteith at Sunday’s Teen Choice Awards.

Monteith, who co-hosted the Teen Choice Awards in 2010, was found dead July 13 in Vancouver, British Columbia. An autopsy revealed the 31-year-old actor died of an overdose of heroin and alcohol.

He and Michele played an on-again, off-again couple in the popular Fox series “Glee” and dated off-screen for about a year.

Michele won Choice TV Actress in a comedy for her role on “Glee” and took the stage and tearfully addressed the audience while wearing a necklace that said “Cory.”

“I just wanted to be here today to personally thank all of you and tell everyone out there how much all of your love and support has meant to me over these very past difficult few weeks,” she said.

She went on to dedicate the award to Monteith saying, “For all of you out there who loved and admired Cory as much as I did, I promise that with your love we’re gonna get through this together. He was very special to me and also to the world.”

She went on to say that “we were very lucky to witness his incredible talent, his handsome smile and his beautiful, beautiful heart so whether you know him personally or just as (his ‘Glee’ character) Finn Hudson, Cory reached out and he became a part of all of our hearts.”

“Glee” also won Choice TV Comedy and cast member Amber Reilly said, “Although we lost someone that we really love and that you guys love too we are very fortunate to come back to a show where we feel the love of family and Cory was like a brother to us.”