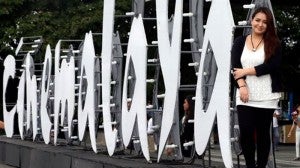 Filipino independent film director Hannah Espia, who directed and co-wrote the film “Transit” poses at the Cultural Center of the Philippines where her film is being shown in the country’s Cinemalaya film festival in Manila. AP

MANILA, Philippines—A film about Filipino migrant workers in Israel who hide a four-year-old boy to try to stop his deportation has hit close to home in the Philippines, where such emotional dramas are all too familiar to millions of overseas laborers and their siblings.

“Transit,” directed and co-written by Filipino Hannah Espia, tells its story from the perspective of each member of two Filipino families living together — a single mother and her half-Israeli teenage daughter, a single father and his boy, Joshua — as they grapple with the Israeli government’s immigration crackdown beginning in 2009 and the decision to deport children who do not meet stringent criteria.

The crackdown followed a period of relative freedom for foreign workers to raise their families in Israel — an exceptional case for Filipino workers who toil overseas and send hard-earned money home to support their families. About 10 million, or 10 percent of the overall population, work abroad, and 40,000 are in Israel, mostly as caregivers.

For children Yael and Joshua, both Israeli-born Hebrew speakers, it is a time of identity struggle. Yael, who attends school in Israel, insists she is an Israeli and only her mother is Filipino. Joshua, who is not yet enrolled, wonders aloud how he could be a Filipino when he does not even speak Tagalog and does not even like the national dish adobo. He asks how does one become Jewish and is upset when he loses a bottle containing sand from Jaffa, afraid he would forget about the land of his birth when he is finally deported.

“We’re always facing threats of deportation everywhere because Filipinos are all over the world, but this is a very rare case because it focuses on the deportation of children,” Espia told The Associated Press.

She said she got the idea for the movie after visits to Israel and after learning about the case in which Israeli Prime Minister Benjamin Netanyahu’s wife Sara appealed for a stay in the deportation of a four-year-old Filipino girl.

Israel has been grappling with how to handle an influx of immigrants. The Jewish state grants automatic citizenship to Jews but doesn’t have a firm policy for others. Most Filipinos arrived legally for specific jobs, and the crackdown on illegal immigration was meant mainly to address an influx of Africans who arrived through the Sinai Peninsula and squatted in south Tel Aviv.

The government issued guidelines in August 2010 that would allow certain immigrant families to remain. It grants permanent residency to children of immigrants if they have parents who entered the country legally, attended school, spoke Hebrew and resided in Israel for at least five years. The criteria disqualify hundreds of children like Joshua.

The film’s focus on the conflicted “third-culture kids” — those born in another country and raised in a culture different from their parents’ — adds another dimension to a recurring topic in Philippine movies that deal with overseas laborers and the emotional price exacted in missing their children’s birthdays and graduations.

Espia said that in the Israeli apartment where they shot most of the scenes, the Filipino tenant recounted how she used to hide her six-year-old daughter under the bed to escape deportation.

“When we were shooting some of the scenes … the Filipinos … who were watching cried because I think that’s something they can really relate to,” Espia said.

Shooting in Israel took nine days and another day at Bangkok’s airport. The rest of the film, which opens and ends in airports, was shot in the Philippines.

Espia said that the main cast had to learn Hebrew for a month before shooting began. Lessons were held via Skype and with the help of a Hebrew consultant. The movie has English subtitles.

“People have been saying that this is an ambitious film, to speak in Hebrew, but they did learn really fast,” Espia said.

Espia is looking to enter it in other film festivals and says international releases for the film are being negotiated.