The real extra of ‘Ekstra’ 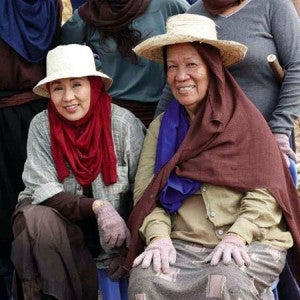 She often plays characters who are ignored and relegated to the background—the nanny, the maid, the grandmother, the neighbor, the taumbayan (face in the crowd).

Erlinda Villalobos, 70, has built a solid industry track record that covers over five decades and three platforms—radio, TV and the movies.

She started in the biz in 1960 as a radio talent for the ABS-CBN station in Iloilo. When the network was padlocked during martial law, she moved to Bacolod. There she worked for the Radio Mindanao Network from 1974 to 1983.

While in Bacolod, Villalobos met fellow voice talent and character actress Vangie Labalan, who convinced her to move to Manila. In the big city, Villalobos—newly widowed at the time—did voice-overs for radio commercials, putting to good use her knowledge of Cebuano, Ilonggo and Tagalog.

In the 1980s and 1990s, she worked as dubbing supervisor for Labalan’s company, Synch Masters—which specialized in dubbing Mexican telenovelas and anime shows in Filipino.

Villalobos recounted: “Vangie would recommend me for all the acting gigs she could not take on. One time, she gave my name to the staff of (the GMA 7 afternoon drama show) ‘Pira-Pirasong Pangarap.’ I was scared at first.”

Happily, she didn’t mess up and the director, Joel Lamangan, was so pleased with her work, that she was asked to appear in seven more episodes.

She made her indie movie debut in Loy Arcenas’ “Niño,” an entry in Cinemalaya 2011—again Vangie had recommended her to Loy.

Joji Alonso, “The Strangers” producer, promised to include Villalobos in Jeffrey Jeturian’s “Ekstra,” for the Directors’ Showcase section of this year’s Cinemalaya.

“Ekstra” is a breakthrough for Villalobos. “I got to act with Vilma Santos—in her tribute to bit players like me.”

“There’s no one like Vi,” Villalobos said. “I’m afraid to approach other stars but with Vi, when she hugs you, you can really feel her sincerity.”

She got to share a dramatic highlight with the country’s Star for All Seasons. “I had to faint in one scene and—I told my children and grandchildren—it was Vi who caught me!”

She has experienced unfair treatment on the set. And, she noted, bit players have been duped of hard-earned talent fees. “We don’t have guilds or unions to protect us,” she said.

So what keeps her going? Nothing beats receiving compliments from colleagues she admires. “(‘Niño’ costar) Raquel Villavicencio told me that Direk Loy had asked her to write a script… with a character modeled after me.”

For Villalobos, that felt like winning a best actress trophy.