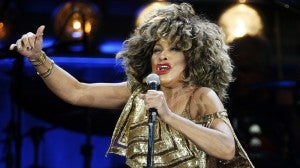 In this Feb. 15, 2009 file photo, U.S. singer Tina Turner performs on stage during her concert at the Hallenstadion venue in Zurich, Switzerland. INQUIRER FILE PHOTO

GENEVA — Tina Turner, the US-born superstar famed for hits such as “Private Dancer,” has married her longtime German partner and will reportedly celebrate the union in a Buddhist ceremony in Switzerland Sunday.

According to Swiss media reports, the pair will celebrate the union at their Kusnacht manor on Sunday with an intimate Buddhist ceremony attended by 120 guests.

Music industry A-listers including David Bowie, Eros Ramazzoti and Sade are due to attend along with television talk show queen Oprah Winfrey, according to Swiss weekly Schweiz am Sonntag, which also reported guests were requested to wear white.

The bride herself, who traded in her US passport for a Swiss one earlier this year, will be wearing a gown designed by Italian fashion giant Giorgio Armani, according to the newspaper, which did not reveal its sources.

Swiss media reported that a small stage would be set up for Sunday’s party, and that Turner and Bach had sent out letters to their neighbors apologizing in advance for the noise they might cause.

Turner, born Anna Mae Bullock in Tennessee, was the voice of such hits as “Simply the Best” and “We Don’t Need Another Hero,” over a five-decades long career, and moved to Switzerland in 1995 when Bach was transferred to the country.

Before her relationship with Bach began in the mid-1980s, Turner was famously married to her musical partner Ike Turner for 14 years.

She left him in 1976 after suffering serious domestic abuse, as detailed in her autobiography “I, Tina,” and alluded to in her 1984 hit “What’s Love Got To Do With It.”