I didn’t lose, my countrymen know me well—Carlo J. Caparas 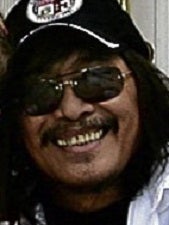 MANILA, Philippines—Filmmaker-comics writer Carlo J. Caparas said though he’s saddened by the recent decision of the Supreme Court stripping him and three others of the National Artist Award, he didn’t feel on the losing end at all.

Asked by anchor-showbiz columnist Jobert Sucaldito if he saw it coming, Caparas said he anticipated the decision, saying the Supreme Court has no faith in the former President who conferred the title to him a couple of years ago.

In 2009, Caparas was declared National Artist for Film and Visual Arts by former President Gloria Mapapagal-Arroyo, raising widespread protests from various groups in the country led by National Artists for Literature Virgilio Almario and Bienvenido Lumbera.  The decision was contested in the Supreme Court.

Though a duly-elected Representative of Pampanga serving her second term, Macapagal-Arroyo is still in hospital detention being tried for plunder and other cases.

Caparas said if the title was given to him, he was ready to finance the education of young poor, promising artists.  Based on the National Commission for Culture and the Arts (NCCA) website, upon conferment, a living National Artist is given cash award of P200,000 (two hundred thousand pesos). An awardee is also given a monthly stipend of P30,000 plus medical benefits.

He said the high court’s decision only proved that to be a National Artist, it’s an unwritten rule that one must have a college degree and more often, an elitist.

“Ang pagiging mahirap pala ay krimen (being poor after all is a crime),” he said.

Caparas said he became who he is now because of hard work. He narrated how he rose from poverty and live a comfortable life even without a college degree.  Caparas and his family live in the plush Ayala Alabang Village in Muntinlupa City.

When asked by Sucaldito if he still believes in the government and those running it, Caparas said, “Malaki tiwala at respeto ko sa mga may magandang hangarin sa bansa natin, hindi ko sila pinag-iisipan na pulitika ito (I still trust and respect those who have good intentions for the country. I don’t think this is all about politics).

Caparas said this is just one of the tests in his life that will eventually make him a stronger and better person.

Caparas has been known for starting and popularizing massacre movies in the 1990s. These were films based on sensational crimes and more often, biopics of jailed criminals.  Prior to becoming a filmmaker, his stories serialized in Filipino comics were later adapted into soap operas.

In a late-night TV news interview, NCCA chairman Felipe de Leon Jr. said because of the decision, the Supreme Court had just brought back the integrity of the National Artist Awards.