As ‘Apprentice Asia’ winds down, Filipino marketer still in Top 5 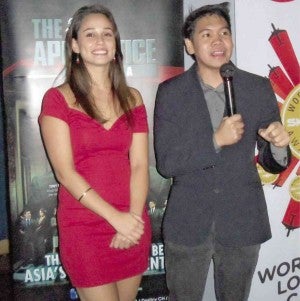 “The world is looking at Asia and the show is helping bring out some really great people,” said Mark Lankester, one of the advisers on “The Apprentice Asia.”

The CEO of Tune Hotels Group was at the press viewing event of the latest episode held at Dillinger’s Greenbelt last Wednesday.

Describing the talent in the Philippines as “absolutely first-class,” Lankester is “humbled” by Filipino contenders Jonathan Yabut and Celina Le Neindre: “I think both Jonathan and Celina have represented your country remarkably!”

Twenty-seven-year-old Yabut, an award-winning marketer, has made it to the Top 5. Le Neindre, a 30-year-old food and beverage consultant who was in the final six, was “fired” by magnate Tony Fernandes, the group CEO of AirAsia, in last week’s episode.

Recalling chores he had to do before shoots, Yabut likened “The Apprentice” to college. He kept himself visible and competitive during the game: “I did [verbalize] that I wanted to be project manager but it was edited out … everyone’s strategy is to stay under the radar, but if you watch my performance, I never settled for third or fourth person position; I’m confident always being the right-hand guy.”

Le Neindre, who worked as a commercial model and waitress before starting her pasta bar business, said that getting past the testing and casting process required more than smarts.

“I think people were looking for that passion, that fire that you have, and whether you’re book-smart or street-smart, when you have that drive, you can make it,” she said. “Everyone was above average, for sure.”

Gotta have a story

“And you need to have a story,” Yabut added. “For example, you’ve got the girl (Celina) who’s got beauty and brains, who rose from the [ranks] and worked her way up. I think that shone the whole time she was there.” 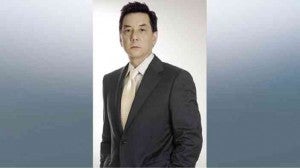 MARK Lankester, an advisor on “The Apprentice Asia.” AXN-ASIA.COM

“I don’t come from a rich family,” Le Neindre said. “My modeling paid for my studies. It paid for culinary school, where the tuition is almost P1 million a year.”

“We shot the whole series in 35 days, nonstop—no Saturdays or Sundays,” Lankester recounted. “[The contestants] woke up at 5 every morning. So everyone was tired. Sometimes your judgment calls and strategies can be a little bit flawed. But that’s the whole idea, to put you under a lot of stress, to see if you perform well [nonetheless].”

“The Apprentice Asia” is a spin-off of the successful US reality game show starring business luminary Donald Trump. Contestants vying for the apprenticeship strictly had “zero contact” with the outside world for the duration of the shoot. Those who fail at certain tasks are “fired.” Episodes of the Asian show were shot in Malaysia and Singapore early this year.

“We ourselves are learning … it’s a little bit different from what you see in the United States version,” Lankester said. “For Season 2, we are casting a wider net. I’m confident you’ll find people coming from Cambodia, Laos and so on … We’re getting the right mix. The key is, the producers have to make it entertaining [while keeping it] real.”

The Filipino contestants hosted the viewing party after the dinner. Episode seven also aired on AXN the same night. In the episode, Yabut and Le Neindre were on opposing teams assigned to redesign the uniforms of AirAsia flight attendants and other employees.

Le Neindre enthusiastically conceptualized most of her team’s proposed uniforms, but the group lost after some of the designs were criticized as “old-fashioned.” She was seen on the verge of tears shortly before she was “fired.”

After the screening, she revealed that it was the first time she watched the episode. Despite remembering her initial disappointment, she expressed appreciation for the “Apprentice” experience. “After watching it, I respected myself more,” she said.