Gracenote out to make a mark 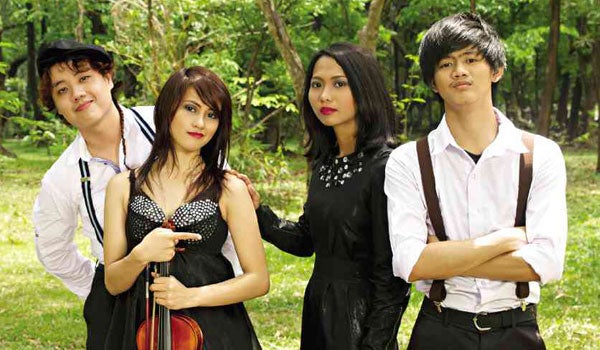 It may have been named after a musical notation that serves as a melodic embellishment, but young local band Gracenote aims to be more than just gilding in the music scene. Members Eunice Jorge (vocals and violin), Chen Pangan (guitars), EJ Pichay (drums) and Jazz Jorge (bass) are steadfast in making an impact—not just in the country, but hopefully, around the world.

It’s a tall, ambitious order most certainly, but one that’s not entirely unattainable, especially in this digital age, EJ says. “Going international and touring abroad is one of our aspirations,” he tells the Inquirer. “You see someone like Psy performing on the world’s biggest stages, and you ask yourself, ‘Why can’t we do it?’”

After all, the band has gone quite far since its days of casual jamming sessions at St. Scholastica’s College more than five years ago. In 2008, the group joined and became a finalist in the inter-collegiate band competition Nescafé Soundskool, where it was mentored by 6cyclemind and discovered by Soupstar Music’s Darwin Hernandez.

As a result of the exposure the band got in the contest, it soon began playing gigs and fronting for more accomplished bands such as 6cyclemind and Callalily.

“Convincing clubs to let us play when we were just starting was tough,” Jazz recalls. “Now we have more opportunities and we get more invitations to play.”

Being in the industry and playing alongside music greats is something the band members still can’t believe, Jazz adds. “We’ve always been fans of OPM. We used to just listen and see the likes of Bamboo or Rico Blanco on TV. Now we see them face to face; they greet me or give me a high five… It’s surreal.”

Eunice believes the band has the necessary tools to to make it big. What it has right now is a set of sprightly, pop-rock tunes with a modicum of punk and sweeping passages of violin, as found in Gracenote’s debut album “First Movement” (Soupstar Music and Universal Records).

Gracenote takes a lot of cues from US pop-punk band Paramore, but the members don’t mind and are not afraid to admit it. “Paramore’s one of our biggest influences. We cover their songs,” EJ says, adding that since both groups have a female vocalist they’re bound to be compared to each other. “But we also look up to a lot of other bands—Yellowcard, Switchfoot, Incubus, Sixpence None the Richer…”

It takes time to really find and build a band’s identity, EJ points out. But he insists that listening to their album would dispel notions that they’re nothing but a local version of Paramore. And much like how the first movement of a symphony establishes its theme, their album “First Movement” is an introduction to their style of music.

“We describe our music as ‘synco-pop-punk-electro-rock… We love syncopated beats and we try to incorporate those in our music,” Eunice explains. On what makes their music distinct, and undeniably Gracenote, Eunice waxes poetic: “It’s hard… It’s like asking why you love someone and you don’t know why… It’s the music itself.”

“The album is a mix of everything; there are fast and slow songs, English and Tagalog. And all of them are originals,” she says. Gracenote has released two singles so far, “Amnesia” and “Pwede Ako,” the latter penned by Herbert Hernandez of Moonstar 88.

While the band has definite goals and dreams to pursue, Eunice says it’s also important to not lose track of why it’s in the music biz in the first place—that is, finding joy playing music. “We don’t want to put too much pressure on ourselves. We want to grab the opportunities that will come our way.”