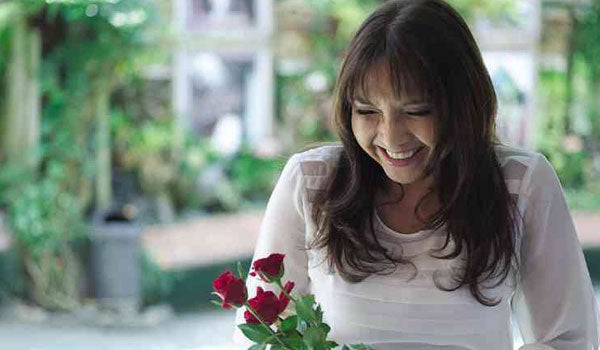 SURPRISED bride giggles as her favorite song, Phil Sheeran’s “The Winds of Time,” is played. Photo by Jiggie Alejandrino.

Actress Chanda Romero summed up the day she finally took the plunge as “crazy.” It was also exhaustingly long.

Romero and partner Jose Mari “Mayi” Alejandrino had been together for almost seven years when they made the decision.

“Mayi’s dad, Bro. Juan Alejandrino, founder of the Mama Mary Movement, had been urging us to have a commitment ceremony to be officiated by Fr. Larry Faraon,” the actress recalled. “Sadly, Mayi’s dad passed away on May 10.”

The couple had their relationship “blessed” in front of family, friends and the urn bearing dad Juan’s ashes, on May 17 at the Tierra Maria chapel in Tagaytay. 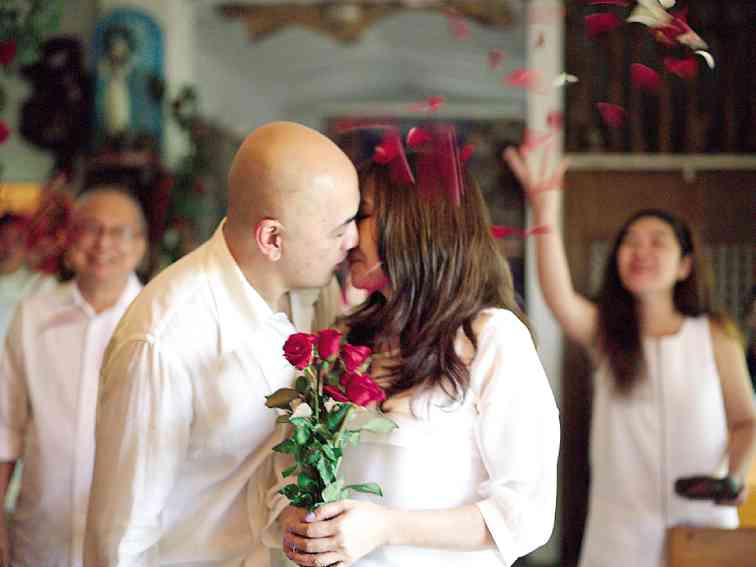 THE VOW is sealed with a kiss, a shower of rose petals and good wishes from the guests. Photo by Jiggie Alejandrino.

(A commitment ceremony, Romero explained, is “as close to a church wedding as you can get … a blessing officiated by a Catholic priest. Our civil wedding will follow in the near future.”)

Twelve hours before the rites, the couple had a belated realization.

Romero related: “It was midnight, I was talking by phone to my sister Marie, who lives in Los Angeles. She asked if we already had commitment rings. We did not! Mayi rushed to his jeweler at 1 a.m. to get them.”

At 7 the next morning, she had a pictorial for the GMA 7 soap opera “My Husband’s Lover.” The actress recounted: “The staffers, led by Carol and Acris, made sure the rest of the cast came on time so I could be in Tagaytay at 12 noon.”

As planned, she was out of the studio by 10, so she could meet up with friend and scriptwriter Ricky Lee, who was to give her away. 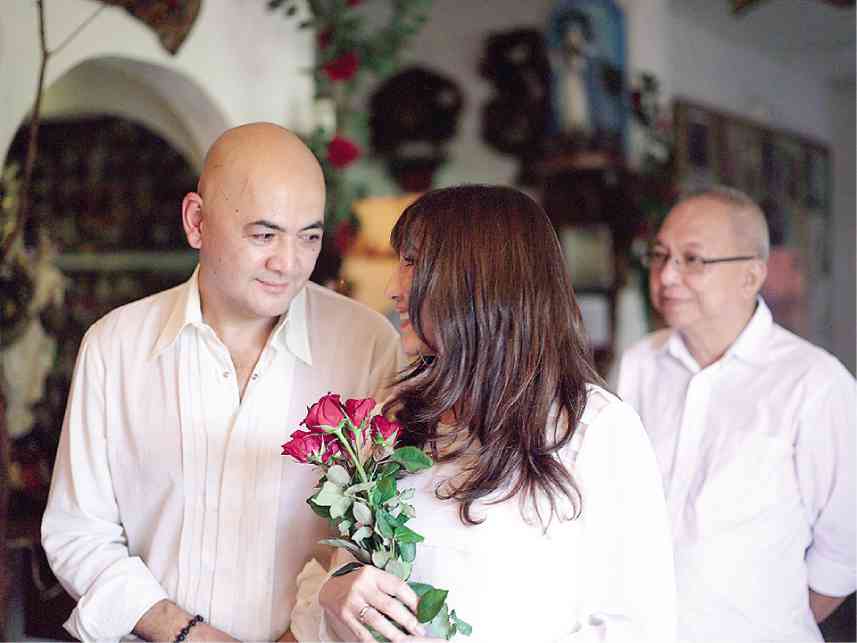 THIS ceremony took seven years to carry out, says the bride who asked her friend, scriptwriter Ricky Lee (right), to give her away. Photo by Jiggie Alejandrino.

(It was a busy day for Lee as well, who had two other events—a niece’s wedding and a meeting that afternoon. He had three different outfits in the car, Romero said.)

En route to Tagaytay, Romero and Lee stopped at a gasoline station. “So I could change into my white pants and off-white top,” she said.

Minutes away from the chapel, the bride realized she didn’t have a bouquet. “I just decided to get some of the flowers meant for Mayi’s dad,” she said. “We barely made it. Mayi had to run down the aisle ahead of me.”

The groom’s sisters scrambled to rearrange chairs and pews in the chapel, to provide an aisle for the bride. The little ones, nieces and grandkids, were outfitted in white and red for the occasion.

Unknown to Romero, her groom had instructed his nephew to play a CD, Phil Sheeran’s “The Winds of Time,” as she walked in. “My favorite song,” Romero sighed.

To her astonishment, it was a full-blown production: “The ladies in the chapel each had a rose which they handed to me as I walked down the aisle. Suddenly, I had a bouquet!”

When the bride, who couldn’t stop giggling because of the “surprises,” looked up, she saw her groom in tears. “He was overjoyed; that touched me deeply,” she said. “To this day, his 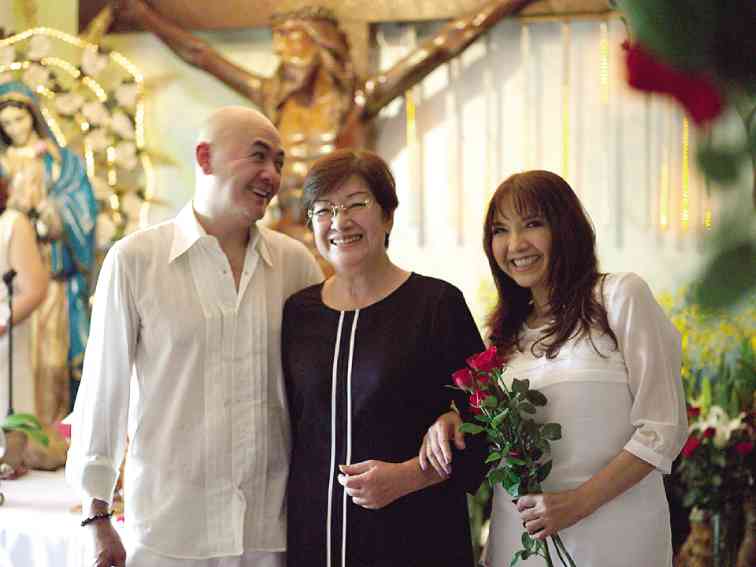 MAYI’S mom, Marivi Eusebio Alejandrino (center), has a photo-op with the couple. Photo by Jiggie Alejandrino.

siblings tease him for crying.”

Romero said Lee described the day, thus: “This could be a short film.”

She admitted, “I was the last holdout. My family and close friends never expected I’d ever get hitched.”