Alden Richards lands a job that he takes ‘very seriously’ 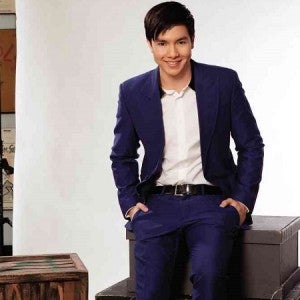 The lead star of “Mundo Mo’y Akin” was recently proclaimed spokesperson for “Pilipinas Go 4 Health,” an information campaign or the Department of Health (DOH).

“I hope to inspire people to think positive and fight their illnesses. This is my way of giving thanks for the blessings that continue to come my way,” Richards told the Inquirer on Monday.

As “champion” of the DOH campaign, Richards is tasked to promote the importance of exercise and eating right.

“As a result, I’ve become more health-conscious myself. I take this job very seriously. I go to the gym as often as I can. I make sure that I’m healthy and fit,” the actor said.

“When our schedule permits, Louise (de los Reyes) and I hope to promote the campaign in different provinces,” he said. De los Reyes, his screen partner, has also been selected DOH campaign “champion.”

As a role model, the 20-year-old actor avoids being seen in bars and party places. “I admit I’m an occasional drinker—it’s part of my job to socialize sometimes. But I don’t get drunk. I don’t smoke, either.”

The Kapuso star has always loved listening to music, usually soothing ballads, and at times, even Gregorian chants.

“I wasn’t confident about my singing skills at first,” he said. “There was always this nagging fear of failing, and I think it hindered my growth.”

But with much cheering and support from his colleagues and fans, Richards decided to give it a try. “I have an album now, but I still don’t see myself as a singer. It hasn’t sunk in yet. Never in my wildest dreams did I think of becoming a recording artist. Still, it is a great chance to show a different side of me,” he said at a recent press con for his self-titled debut album under Universal Records.

His self-titled album carries seven feel-good ballads—six covers and one original song—that capture his boy-next-door image on television. “I’m very happy because my single, ‘Haplos,’ is being used in GMA 7’s “Mundo Mo’y Akin,” said Richards, who looks up to Ogie Alcasid as his idol “because his devotion to his craft is admirable.”

Richards worked with vocal coach Kitchie Molina and former Neocolours vocalist Ito Rapadas to get through the technical challenges of singing.

His foray into music, he stressed, wasn’t a side project or just something to keep him busy. “I do everything on the same level. As an artist, you don’t just act. You should also be able to sing and dance. This is me, working to be a complete package.”

Richards has these pieces of advice for fulfilling one’s dreams: “Work hard. Put your mind and heart into achieving your goal. There was a point in my life when I almost quit.”

Richards was referring to the ABS-CBN program “Pinoy Big Brother: Teen Clash of 2010,” where he failed to make the cut. He also failed the auditions for “Starstruck,” another talent show, in 2009.

Luck turned Richards’ way when he got invited to audition for the role of Joma Perez in the  2011 fantasy-drama series “Alakdana” on GMA 7.

A regular on the variety show “Sunday All Stars,” Richards will be seen on the big screen again in the Robin Padilla-starrer “10,000 Hours,” an entry to the 2013 Metro Manila Film Festival in December.