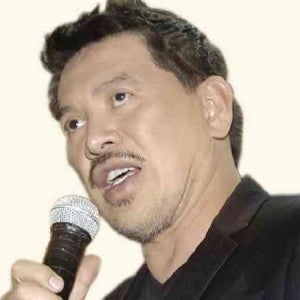 MENDOZA is an Inquirer Indie Bravo! Tribute honoree twice over. French officials say his films have found a “dedicated audience” in their country. JIM GUIAO PUNZALAN

This latest honor caught Brillante Ma. Mendoza by surprise. The filmmaker said French Ambassador Gilles Garachon didn’t mention it the last time they were together, so the letter from the embassy hit him like a bolt from the blue.

Signed by Garachon, the official correspondence said Aurelie Filippetti, French Minister of Culture, had just announced Mendoza’s selection as a recipient of the Chevalier dans l’Ordre des Arts et Lettres (Knight of the Order of Arts and Letters).

The message explained that Mendoza had been awarded the “prestigious” honor for his “truly invaluable contribution in the field of arts.”

Mendoza attended a Chevalier awarding ceremony in Paris, France, two years ago and was told by a government official that he also deserved the citation.

“I didn’t think it was possible since I’m not a French citizen,” he recalled. “I didn’t know foreigners qualified.”

According to the same site, the Order has three grades: Commandeur (Commander), Officier (Officer) and Chevalier (Knight). Every year, there are usually 200 recipients of the Chevalier honor; 60, Officier, and 20, Commandeur.

Martin Macalintal, audio-visual attaché of the French embassy in Manila, told the Inquirer that the awarding ceremony will be held “soon” in the country.

Mendoza will receive a medal and a certificate from the French Ministry of Culture at the ceremony.

According to Macalintal, Mendoza is the “first Filipino filmmaker to receive the title of knight.”

Mendoza said he had given up on the prospect, since there was a change of government in France. “I didn’t think I was still in the running,” he said. “But I am overjoyed and humbled to be in this roster of artists. It’s not just my work that’s being recognized, but also my contribution to culture. This makes me proud to be Filipino.”

Said Garachon: “Mendoza personifies the rebirth of Philippine cinema. His knighthood …  is a recognition of his talent and body of work that has found a dedicated audience in France where his films are released commercially, giving the French moviegoers a glimpse of contemporary Philippine society.”