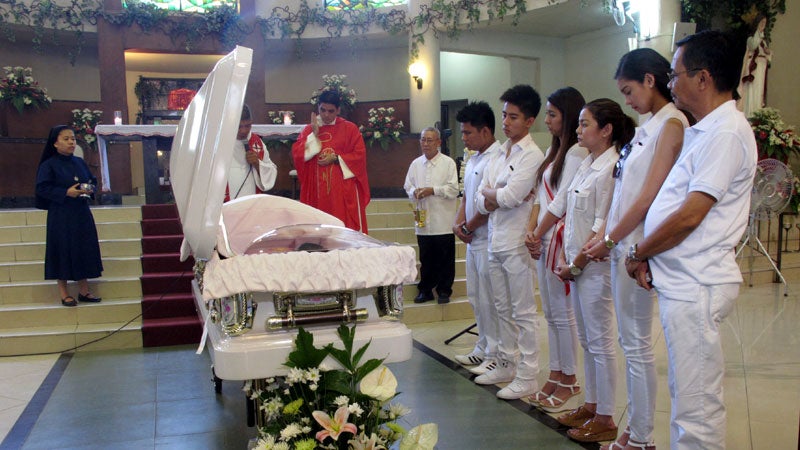 CEBU CITY – The gloomy weather seemed to jibe with the sadness visibly felt by actress Kim Chiu as she bade farewell to a mother she had not seen for years.

Clad in white pants and white sleeveless blouse, Kim embraced her elder sister, Lakam, weeping as their mother, Louella, was laid to rest at the Cebu Memorial Park in Barangay (village) Banilad.

Amid dark clouds and a drizzle, kibitzers and fans, who were watching the funeral ceremony from a distance, also failed to hold back their tears when they saw Kim crying.

Louella, 50, died of a burst aneurysm last June 23. It was painful for Kim to lose her mother, whom she had not seen for years after her parents separated when she was very young.

Kim, who had been searching for her mother, was distraught to find her in hospital and in a coma.

She and Lakam left for Thailand on Wednesday for a commercial shoot. But she returned on early Saturday in time for the funeral. Lakam arrived earlier.

The funeral followed the advice of a feng shui expert consulted by the family. The actress is a Chinese-Filipino who lived in Cebu before moving to Manila to join the reality television show “Pinoy Big Brother: Teen Edition,” where she emerged winner.

The funeral cortege left the Cosmopolitan Funeral Homes in Nivel Hills, Cebu City about 9 a.m. for a Requiem Mass at St. Therese Parish in Barangay Lahug, about a kilometer away.

Kim’s father, William and her four siblings led less than a 100 mourners who were all clad in white.

The 10 a.m. Mass had already started when Kim arrived. She removed her sunglasses, revealing eyes that were swollen. Her father ushered her inside.

The church was surrounded by police officers to maintain the solemnity of the service as fans and curious individuals gathered outside to catch a glimpse of the actress and her family. Only close friends and relatives were allowed inside.

Father Ronaldo Paulino said in his Homily that she was with Louella in the hospital upon the request of the family. He said he told the family to thank Louella one last time and tell her that she has been forgiven for her shortcomings. At the same time, he added, the family should also seek her forgiveness. 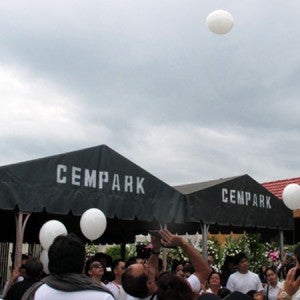 FLY AWAY HOME
Mourners watch the white balloons as they are released during the funeral for the mother of young actress Kim Chiu in Cebu, June 29, 2013. CARINE M. ASUTILLA/INQUIRER VISAYAS

He said it was about time Louella was at peace as he had seen her suffering while in the hospital. He added he saw the family suffer as well.

After the Mass, the funeral procession proceeded to the memorial park, passing through Cebu IT Park in Barangay Apas as, according to the feng shui expert, it was best route to the cemetery.

The white casket bearing Louella’s remains was taken to a lot located at the far end of cemetery where her family bade their last farewell.

Following Chinese custom, some of Louella’s belongings were burned while her eldest son carried her framed photo.

As the casket was pushed into a tomb, white flowers were thrown inside white balloons released into the sky.